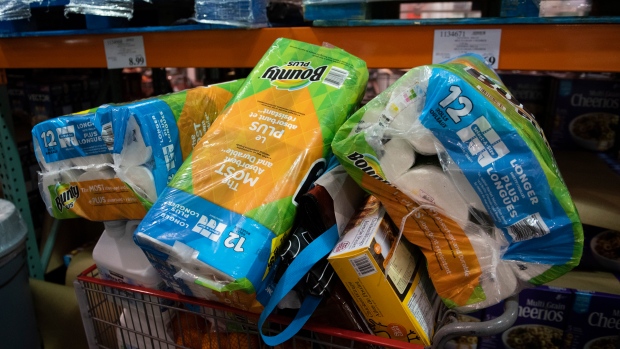 A cart is stocked with paper towels, supplies and food at a Costco in Ottawa on Friday, March 13, 2020. THE CANADIAN PRESS/Justin Tang

MONTREAL -- The head of Canada's largest manufacturer of tissue products says he's concerned about the industry's supply of paper towel ahead of a potential second wave of COVID-19.

He says the industry is "very tight" on paper towel inventory across North America, despite efforts to build up supply.

Although slated to open in February 2021, he said the company is trying to get the factory up and running faster. Some machines started over the summer, while more are set to come online in October.

Bianco said the plant will increase the company's paper towel and toilet paper manufacturing capacity by 20 per cent.

Meanwhile, he says the company is also seeing a shortage of the recycled fibres used in about 25 per cent of its tissue products.

Bianco says Kruger recycles white paper used in offices, but that the market has dried up because people aren't in offices printing.