Parade planned in the Beaches to honour Rio athletes on Sunday 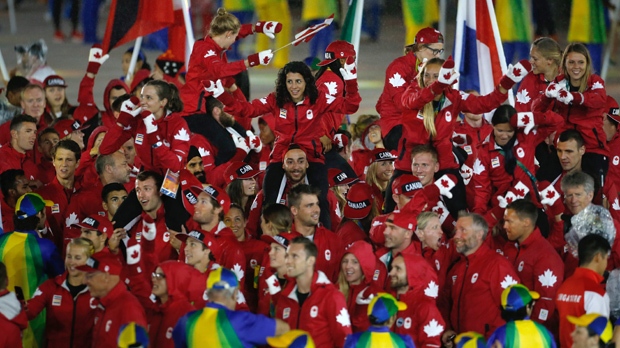 Athletes from Canada march into the stadium during the closing ceremony at the 2016 Olympic Games in Rio De Janerio, Brazil on Aug. 21, 2016 (Gary Hershorn/SilverHub)

Local business and community leaders have organized a parade to honour Canada’s athletes at Rio Games in the Beaches this Sunday, including the neighbourhood’s very own Penny Oleksiak.

Members of the Beach Village BIA and the Danforth East Community Association wanted to honour the athletes’ success in Rio with a parade in their honour.

The parade will start at 11 a.m. in East Lynn Park. Organizers invited several former and current athletes, including Penny Oleksiak, Andre DeGrasse, Elaine Tanner as well as several others. The athletes are expected to ride through the procession from Danforth Avenue onto Woodbine Avenue heading south.

The parade will then make its way onto Queen Street East and head east until Kew Gardens Park.

Toronto and the GTA is or was home to three of the most prominent athletes in Canada’s team in Rio.

Sixteen-year-old swimming phenom Oleksiak goes to high school at Monarch Park Collegiate and lives in the Beaches. She became a household name after she won four medals at the Rio Games, convincing the Canadian Olympic Committee to grant her the honour of carrying the flag at the games’ closing ceremony.

Andre De Grasse, who won two bronze medals and a silver in Rio, went to high school in Markham before moving to the southern U.S. to study and train.

Rosie McLennan, who successfully defended her 2012 trampoline gold medal at the Rio Games, is from King City.