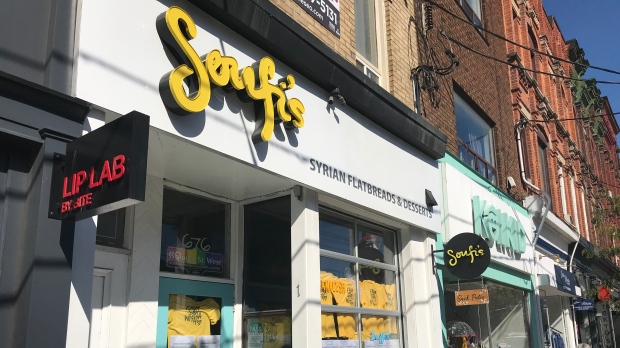 Soufi's will permanently closed after family and staff received “numerous hate messages” and death threats over the past week. (Scott Lightfoot)

The founder of a well-known Middle Eastern food chain is offering his support to the owners of a Syrian restaurant in Toronto after they announced they were permanently shuttering their shop amid death threats and “messages of hate.”

Mohamad Fakih, the Chief Executive Officer of Paramount Fine Foods, said that he wants to do what he can to help the owners of Soufi’s reopen their popular Queen West restaurant.

The business, operated by a Syrian family who recently immigrated to Canada, came under fire last week after the son of the restaurant’s owners was involved in a protest outside a fundraiser in Hamilton for Maxime Bernier’s People's Party of Canada (PPC).

Videos of the incident, which have been circulating online, show protesters harassing an elderly woman outside Mohawk College, where the event was held on Sept. 29.

One protester reportedly called the woman “Nazi scum” and stuck a foot in front of her walker to prevent her from entering the building.

The restaurant’s owners later confirmed that their son was one of the protesters at the event but denied that he verbally or physically assaulted the woman.

“Our family and business do not condone acts of hate, violence, or harassment in any shape or form, and advocate for peace, equality and free speech for all human beings. Our family immigrated to Canada with the intention of living and working peacefully,” the Alsoufi family said in a statement posted on the restaurant’s Facebook page, which has since been deactivated.

Husam and Shahnaz Alsoufi moved to Canada with two of their children in October 2015 and said they were inspired to open the restaurant in Toronto to share their love of Syrian culture, music, and “delicious homemade food.”

But after a little more than two years in business, the family said Tuesday that they would be forced to close to avoid putting family members, staff, and patrons in danger.

Please know that we do not wish to hide or conceal the events that led to these threats, and wish to share the full story and address claims made by certain media groups in the near future, once it’s safe for us to do so

The family confirmed that they have received “numerous messages of hate” and “death threats” since the incident at Mohawk College.

They said that the decision was made to permanently close the restaurant after their son was “doxed and physically assaulted” on Friday.

"The magnitude of hate we are facing is overwhelming," the family said in a statement. “We know this hate does not reflect the people of Toronto. The people of Toronto are loving, welcoming people. We have heard from countless community members and organizations who have restored our faith in the city.”

After learning of the story on Tuesday, the Paramount Fine Foods CEO said he decided to reach out to the family to figure out how he could help.

He suggested providing the restaurant with appropriate security to reassure the family that they are safe.

He added that he would even consider sending his own team to open the restaurant under the Soufi’s name if that is what is required to get the business up and running again.

Fakih noted that he plans to speak to the family again today to discuss the situation further.

“We can’t let hate win,” he said Wednesday. “We will lose ourselves.”

Patrons of the restaurant have also expressed their support for the family on social media.

“I am so sad and infuriated about this,” one Instagram user said in response to the news of the closure. “I’m angry the police hasn’t offered more: they should be helping to protect your business.”

Another person wrote, “I hope (it’s) solved soon and we can all enjoy your amazing manakeesh again. So sorry you have to go through this.”

According to The Canadian Press, the family is filing a complaint with Toronto police regarding the threats.