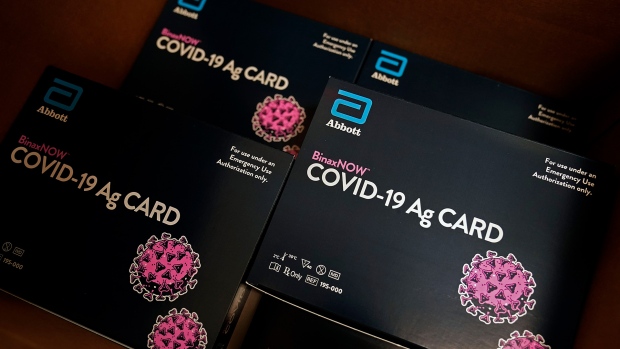 A box of coronavirus tests are ready for use in the student health center on campus at North Carolina Agricultural and Technical State University in Greensboro, N.C., Wednesday, Feb. 3, 2021. (AP Photo/Gerry Broome)

All across Ontario, more parents of elementary school-age children are building their own asymptomatic COVID-19 testing programs for their local schools, but often can’t access supplies due to a government policy that still prioritizes rapid tests for business.

In order to obtain the tests, she said she set up a community organization called Momma Owl, and was able to apply to the Toronto Region Board of Trade, which has a portal to distribute tests to businesses with 150 employees or less in the GTA.

“As a community organization, I could apply, so I did and we picked up the tests,” Wise-Milestone told CP24.

On the first day of school, she stood near (but not on the grounds) of Regal Road, with a large sign, inviting parents to sign up their kids for the testing program.

“People must have thought I was on strike,” she said.

“People have been commenting and showing pictures of their kids, they think it’s a science experiment – and the kids are quite happy to swab themselves.”

She said parents have told her that they didn’t realize the anxiety their own children were harbouring about possibly carrying the virus into their school unknowingly.

“They didn’t realize the burden their child felt, where they know their parents are vaccinated and they know they’re going to this high-risk environment every day.”

But for Wise-Milestone to expand her program to 300 students, someone else will have to set up a different community organization and register again with the Toronto Board of Trade to receive more test kits.

She said she hopes the province and school boards begin to see the merits of frequent asymptomatic rapid testing of students, even if just for neighbourhoods at the highest risk of outbreaks.

“Even if they realize these tests should be in high-risk areas, I will gladly cease the program so that the high-risk communities can have these tests.”

The grassroots testing push comes as Ontario’s top public health official characterized the growth of COVID-19 in public schools, fast accelerating beyond the rates in schools at this point last year, as “a win” for the ventilation, mitigation and testing efforts in place in the school system.

Dr. Kieran Moore also said there are plans to deploy more tests in schools, but only in areas facing widespread outbreaks, and urged parents not to “go ahead” of government by setting up testing regimes themselves.

“I don’t think parents have to go ahead of us and I do think we’re going to put the best science (forward) to protect our schools,” he said when asked by CP24 on Friday.

Dr. Moore said there are plans “in play” to have rapid tests used in schools in southwestern Ontario, where cases per capita now exceed 100 per 100,000 residents in some areas.

“I just discussed it this morning with (Public Health Ontario), we are prepared to put them in play in high risk communities, there are active discussions with health units in the southwest where they have high rates of community infection,” he said.

As of Sept. 3, Health Canada said more than 13.5 million rapid COVID-19 tests have been delivered to their final destination, but are still waiting to be used in Ontario.

Most of these tests are earmarked for use in businesses through the Ontario Rapid Antigen Screening Program and similar parallel programs run by organizations such as the Toronto Board of Trade or Communitech in Kitchener, Ont.

At Earl Beatty Junior and Senior Public School, believed to be the first public school in the province where parents took testing into their own hands, mom Bamini Jayabalasingham, a former public health worker with a PhD in microbiology, can’t believe the government isn’t moving more quickly to implement surveillance testing in schools.

“I don’t understand why you would give tests to vaccinated adults in businesses.”

“You vaccinated everyone except kids, and now the kids are together and it’s fall. It doesn’t seem to me that high-end science was needed.”

So far, the rapid screening at Earl Beatty has identified no presumptive positives.

But not all schools are as lucky.

There are now 1,450 known active cases in Ontario schools, impacting roughly 16 per cent of all public schools.

Jayabalasingham says there are still parents sending children to school with symptoms consistent with COVID-19 knowingly, simply because they have no other choice.

“I am hearing about kids being sent to school with symptoms knowingly, not in my school where parents can work from home - but in other schools where parents work two jobs.”

The privilege in building a do-it-yourself surveillance testing program irks parents in other schools too.

Courtney Walker and other parents at Roden Public School and Equinox Holistic Alternative School in Toronto’s east end plan to start their asymptomatic testing program this week, with as many as 75 kids participating.

“One of us is an ambassador at Stay Safe,” Walker said, referring to the test handout program run in Kitchener, Ont. that is also used by parents at Earl Beatty.

“They’re driving to Waterloo, they have the time to do that. The parents pay for the gas and they have to go during traditional hours of the work week.”

“There’s so many layers of privilege.”

She said the way that public school families are able to access testing, with fewer appointments available at testing centres, no asymptomatic testing available for kids under 12 and only backdoors to access the stockpile of rapid tests, reminds her of the vaccine rollout in Ontario during April and May.

“You’re having to take things into your own hands because you feel like the province doesn’t have your best interests in hand.”

When asked about spread of COVID-19 in schools, Dr. Moore said the measures he ordered to be in place are making a difference.

“Right now, the outbreaks have been limited. They’ve been spreading from one child to two to four children. So with Delta (variant), I think that’s a win that we’ve been able to limit the spread to that few (children), and that’s a good news story,” he said.

Ontario’s opposition parties and parents in the public system were outraged and the Ministry of Education responded by saying it would halt all shipments of tests to private schools if they were to be used to test students.

The principal of one of the private schools involved, University of Toronto School’s Rosemary Evans, said on Twitter they received enough government tests to run the program for one month.

“The response was just so unbelievable – when they decided to take it away from private schools,” Wise-Milestone, from Regal Road Junior Public School, said, adding an analogy. “One seatbelt in my car is broken, so I break the other seatbelt so that both my kids are in danger.”

Other parents want to set up programs for their schools, but can’t get any tests.

Alison Attanasio whose children attend Williamson Road Public School told CP24 she has been looking high and low for tests, trying a number of different sources.

“I’m trying to make sure we don’t put all our eggs in one basket, I’ve asked the Red Cross, the (Creative Destruction Lab Rapid Testing Consortium, I am following and tracking down leads, asking personal contacts, friends of friends,” she said.

So far, she has gotten her hands on 15 test kits.

“There is a difficulty getting this screening tool to a population that is unable to be vaccinated yet and it is incredibly frustrating.”

Even with the frustration, Jayabalasingham said she is encouraged that public health leaders are even suggesting limited instances where they would use rapid tests in schools.

“I didn’t expect the coverage from the media to have such an impact in literally the words that are being used in the (press conferences),” she said. “I know that government moves at a glacial pace, but even the talking points seem to have changed since last week.”