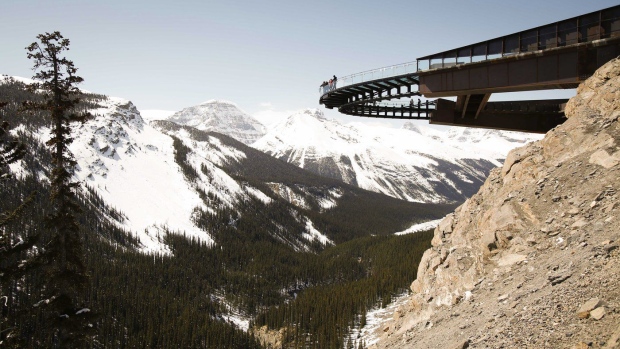 Tourists take in the views from the newly opened Glacier SkyWalk near the Columbia Icefields in Jasper National Park, Alta., Wednesday, May 7, 2014. Parks Canada says a grizzly bear cub has been orphaned after its mother was fatally stuck on a highway in Jasper National Park. THE CANADIAN PRESS/Jeff McIntosh

JASPER, ALBERTA - Parks Canada says a grizzly bear cub has been orphaned after its mother was fatally stuck on a highway in Jasper National Park.

A news release from Parks Canada says the mother was with her cub on Highway 16, about five kilometres east of the Jasper townsite, late Thursday night when a commercial transport truck hit her.

The release says the truck driver reported it to Parks Canada dispatch and remained at the scene until help arrived.

The cub was located early Friday, the release says, and appeared to be doing well.

It says Parks Canada staff will closely monitor the cub in the days ahead.

It says the cub is old enough that it has likely learned some of the tools needed to survive on its own, and that removing or relocating bears is always a last resort.

“Removing wildlife from the landscape can have serious impacts on overall future bear populations and their viability, and relocating bears can increase the potential for conflict with other bears and reduce their chance of success,” Parks Canada explained in the news release.

Parks Canada reminds motorists to help avoid collisions with bears by obeying posted speed limits, and by slowing down in areas of traffic congestion or when wildlife is spotted.

It also asks people to adhere to park wildlife viewing guidelines by staying in vehicles in the presence of roadside wildlife, and to report any serious or unsafe wildlife issues.