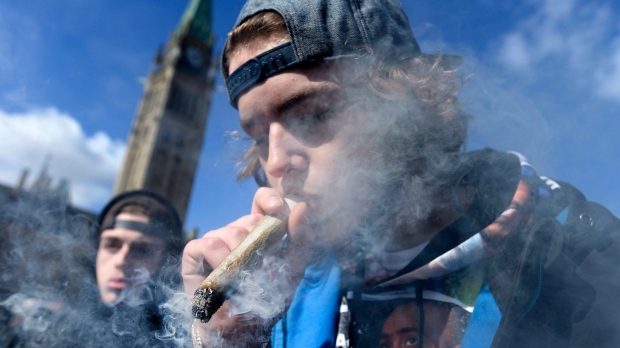 A man smokes a marijuana joint during the annual 4/20 celebration on Parliament Hill in Ottawa on Friday, April 20, 2018. (THE CANADIAN PRESS/Justin Tang)

OTTAWA -- The first 4-20 demonstration on Parliament Hill since marijuana became legal is expected to draw an even larger crowd than usual.

Several thousand people normally set up shop on the Hill to smoke marijuana and highlight cannabis culture but organizers of this year's event expect many more people to emerge from their shells and join in now that it's legal to do so.

But during a morning press conference today, the organizers also made clear there are still issues the federal Liberals have left hanging, making the job of legalization incomplete.

Shawn Mac calls the legal cannabis system a "boondoggle" and accuses the government of using misleading information to justify over-regulation that has helped large companies in the market.

The Marijuana Party of Canada says the Liberals need to expunge past convictions for simple possession, instead of suspending records, and issue a formal apology for the harms prohibition had particularly on black communities.

There are also concerns being raised about the government's decision to tax medical marijuana.