Parole board found Stuckless of ‘moderate’ risk to re-offend 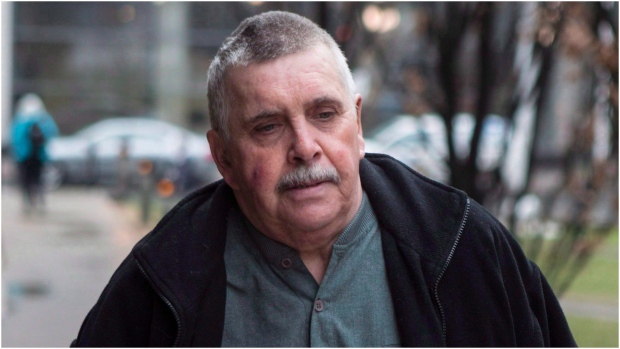 Gordon Stuckless arrives at court in Toronto on Tuesday April 22 , 2014. Prosecutors are appealing the sentence for the man at the heart of the Maple Leaf Gardens sex abuse scandal.THE CANADIAN PRESS/Chris Young

Federal parole board members released notorious child sex offender Gordon Stuckless to a halfway house in Hamilton last month because of his age, continued acceptance of chemical castration medication and frequent admissions while in custody of deceptive past behavior.

The reasons for release are found in a Parole Board of Canada decision obtained by CTV News Toronto on Thursday.

In it, parole board members say that while confined, the now 70-year-old Stuckless told correctional officers of the “mask” he used to hide his sexually deviant and criminal behaviour from friends and loved ones.

“You spent considerable time in the program outlining the ‘mask' you wore at the time of your offending,” parole board members wrote last month. “Through programming you recognize that you did not want others to see the real Gord and what you were doing.”

Hamilton police told CTV News Toronto on Wednesday that they are aware that Stuckless is living in a halfway house in downtown Hamilton and are “taking appropriate actions to monitor him.”

Stuckless pleaded guilty in 1997 to sexually assaulting 24 boys while he worked as an equipment manager at Maple Leaf Gardens between 1969 and 1988. He was eventually sentenced to six years on appeal, less a year for time served. He received parole in 2001 after serving two thirds of that sentence.

Then in 2013, he faced 100 new charges after more victims came forward to report historical offences.

In 2016, Stuckless was convicted of sexually assaulting 18 boys over a period spanning three decades. He was sentenced to 6.5 years in prison, less six months for time served under house arrest.

In a split decision in June 2019, the Court of Appeal for Ontario found that the 2016 sentence was too lenient and issued a new sentence of 10 years in jail, less six months for time served under house arrest.

While confined, the parole board found that several successive psychiatric assessments found Stuckless at “low risk” for recidivism, provided he continued to take a sex-drive reducing drug called Lupron.

Lupron is commonly used to treat prostate cancer in men, endometriosis in women, or the early onset of puberty in young children.

The board says Stuckless has been taking the drug for “decades.”

Beyond the drug use, the board cited a federal correctional predictive “score” assigned to each inmate that calculates likelihood of recidivism.

They put Stuckless at a “seven” on the scale, meaning “four out of five similar offenders will not commit an indictable offence within three years of release.”

As such, the board said it was time for Stuckless to be released to a halfway house, for a period of up to six months.

“Based on your positive institutional behaviour and structure of your release plan, (Correctional Service Canada) considers your risk manageable in the community at this point in your sentence.”

But the board members conceded Stuckless’ acts caused life-long trauma and pain for dozens of his victims.

“In reaching its decision to grant day parole, the Board is mindful of the serious harm your offending continues to have on the victims, their families, and our communities. Each time you offended in order to satisfy your deviant sexual urges, it came at the expense of an innocent child.”

Stuckless told the parole board he has a pension from his work as an equipment manager at Maple Leaf Gardens, and plans to live on that as a "retired" person.