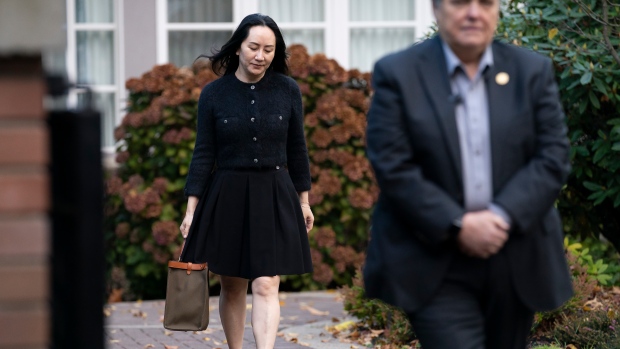 Chief Financial Officer of Huawei, Meng Wanzhou leaves her home in Vancouver, Friday, October 30, 2020. Wanzhou is heading to the British Columbia Supreme Court in a evidentiary hearing on her extradition case on abuse of process argument. THE CANADIAN PRESS/Jonathan Hayward

VANCOUVER - A Canadian border officer says Huawei executive Meng Wanzhou's phone passcodes were shared with the RCMP two years ago through a personal blunder, not a plot between law enforcement agencies to thwart privacy laws.

Scott Kirkland testified at a B.C. Supreme Court hearing on Friday that he placed a piece of paper with the codes on top of Meng's electronic devices during her customs and immigration exam before her arrest at Vancouver's airport. He only realized it was gone days later during a debrief meeting, he said.

“It was an embarrassing moment for me in that meeting,” Kirkland said. “It was heart-wrenching to realize I made that mistake.”

The court heard evidence this week that Meng's defence team hopes will bolster an argument they will make next year during extradition proceedings that she was subject to an abuse of process.

The defence alleges that Meng was subjected to a “co-ordinated strategy” to have the RCMP delay her arrest so border officials could question Meng under the pretence of a routine immigration exam, and that both RCMP and Canada Border Services Agency officials kept intentionally poor notes.

“My suggestion is that you and the RCMP co-ordinated your efforts to be able to allow the CBSA to use their statutory mandate to obtain evidence that may be of assistance to other law enforcement,” defence lawyer Mona Duckett said.

Kirkland said that idea didn't make sense to him.

“There's more headache than there is gain to do anything like that,” he said, adding he knew the case would be scrutinized by several levels of law enforcement.

“Do you have a headache right now?” Duckett asked.

“Yeah, I've had a constant headache for the past three days,” Kirkland said on the third day of his testimony.

Meng is wanted in the United States on fraud charges over allegations she lied to HSBC about Huawei's relationship with a company doing business in Iran, putting the bank at risk of violating American sanctions against that country.

Meng and Huawei deny the allegations.

The court has heard that Kirkland first learned of the case only one hour before Meng's plane landed.

RCMP and border agency officers agreed in a meeting that morning that the CBSA would examine Meng before handing her to the Mounties to execute the arrest, three witnesses have testified.

Kirkland and his supervisor, Supt. Bryce McRae, each told the court that Meng had been flagged in an internal system because of a warrant. They both said they found information in online news articles that suggested she might pose a national security risk.

The court has heard the lookout for Meng did not indicate a national security risk.

Border officers identified Meng on the jetway, collected her phones and brought her into an examination room. While another officer questioned Meng, Kirkland said he kept watch over her electronics.

At one point, the officer asked Kirkland to collect Meng's phone numbers. He couldn't recall if he was asked to collect the passcodes or made the decision himself.

But he denied that he led Meng to believe she was required to share them.

Meng asked why Kirkland needed the numbers and codes, and he told her it was for the purposes of the customs and immigration examination. He wrote them down for her because she was uncomfortable with her own handwriting, he said.

He asked for the passwords to her other devices but she declined, he said.

“I did not say she had no choice,” Kirkland said.

“I explained why we were asking for them.”

Kirkland has said it's typical to search electronic devices during a customs and immigration examination when there is a suspicion of inadmissibility to Canada, and he assumed the border agency would search Meng's devices.

Seven minutes after the phone numbers and passcodes were recorded, Meng was escorted into another room where the RCMP arrested her and informed her of her charter rights to silence and counsel.

Kirkland said the phones remained in an anti-static bag in his pocket and were never examined by border officials.

He denied that the error of leaving the piece of paper with the electronics was only discovered after inquiries were made in January.

However, he acknowledged that when he wrote a new statutory declaration on Dec. 20 correcting some of the time codes he had provided earlier as part of his notes, he did not add that he mistakenly shared the paper with the passcodes.

The evidentiary hearing will continue in November.