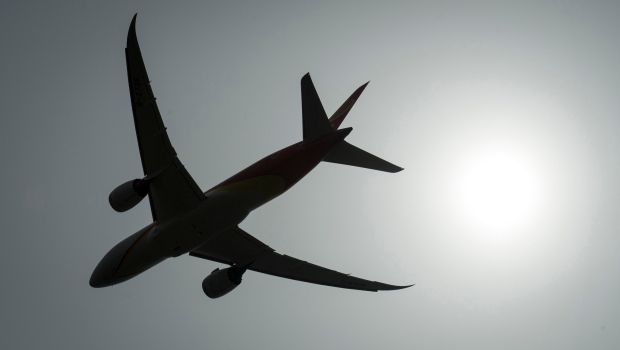 A plane is silhouetted as it takes off from Vancouver International Airport in Richmond, B.C., on May 13, 2019. THE CANADIAN PRESS/Jonathan Hayward

OTTAWA - Air travellers will be able to apply within two weeks for unique codes intended to prevent mismatches with names on the country's no-fly list, Public Safety Canada said Wednesday.

The “Canadian Travel Number” is a key step in revamping passenger-screening procedures after many young children were stopped at airports because their names were the same as, or close to, ones on Canada's no-fly roster.

Passengers who have experienced difficulties will be able to apply for travel numbers via the Public Safety website to help avoid false matches when booking flights to, from or within Canada.

The airline would give a passenger's number to the government, which will be responsible for screening passengers against the Secure Air Travel Act watch list, commonly known as the no-fly list.

Federal officials would then inform the air carrier should there be any added screening requirements or an outright prohibition on allowing the person to fly.

The government says the new system will improve the security of air travel and protect passenger privacy since airlines, which now use the no-fly list for screening, will no longer have direct access to it.

Public Safety Minister Bill Blair said the government is working to get the largest 11 air carriers, which represent about 90 per cent of air travel to and from Canada, linked up to the new system by next June.

“We're moving on this as quickly as possible,” Blair said in an interview. “We'll start with the big air carriers because we can manage that quickly, and then we'll continue to proceed until we've got all of them online.”

Adam Ahmed was just six years old when he ran into airport check-in snags on a family trip to Boston in late 2015 to see an NHL game.

It was a recurring problem for the little boy and one that affected other families across Canada with young children.

The group welcomed the developments Wednesday, calling the launch of the travel number and centralized screening system “one step forward in the call for ongoing and increased accountability, transparency and anti-racist policies” from security agencies.

In the House of Commons, Prime Minister Justin Trudeau said when the government became aware of the issue years ago, it assured families something would be done.

“We can all agree that 10-year-olds should not have to worry about being publicly singled out when trying to watch their favourite hockey team in action.”

“This was extremely difficult for them, and for their kids, to be singled out in this way.”

This report by The Canadian Press was first published Nov. 4, 2020.