Lawyers for Patrick Brown have filed notice with the Conservative Party of Canada that they intend to appeal a decision to disqualify him from the party’s leadership race.

In a letter sent Wednesday to Chief Returning Officer Don Nightingale, lawyers Marie Henein and Alex Smith said they intend to appeal his decision to recommend to the party’s Leadership Election Organizing Committee (LEOC) that it disqualify Brown.

“To be clear, Mr. Brown has engaged in absolutely no misconduct,” the lawyers wrote in their letter. “Your refusal to specify the allegations grounding your recommendation demonstrate this. He has refuted the paltry information you have provided and repeatedly asked for particulars.”

They called the process to disqualify Brown “Kafkaesque” and “politically motivated” and said it had a “preordained result and is not consistent with the values that should be upheld by this party.”

The lawyers also called it “profoundly disturbing” that Brown only learned of the recommendation from media reports after the LEOC accepted it and advised the party to retain all documents and records relating to Brown’s disqualification as the matter “may now be the subject of anticipated litigation.”

Brown was disqualified from the Conservative Party leadership race late Tuesday night after the LEOC's Chair Ian Brodie said it learned of allegations related to the financing rules in the Canada Elections Act.

“The information provided to date by the Patrick Brown campaign did not satisfy concerns about their compliance with our Rules and Procedures and/or the Canada Elections Act. The Chief Returning Officer has therefore recommended to LEOC that LEOC disqualify Patrick Brown and earlier tonight LEOC agreed to do so,” Brodie said in a written statement.

“Throughout the investigation into these allegations, the Chief Returning Officer and I have done our best to be fair to the Patrick Brown leadership campaign and provide them with the time they need to substantively refute these allegations,” Brodie said.

Brown says he was kicked out in a “politically corrupt” move based on an anonymous allegation backed by supporters of leadership rival Pierre Poilievre – the long-time Ottawa-area MP who is considered a front-runner in the race.

“My campaign did nothing wrong. And I can tell you if we heard of anything that was wrong, we would immediately address it,” Brown said Wednesday morning to CTV’s Evan Solomon in his first interview following his disqualification.

“They told our campaign there is an allegation that someone was being paid by a corporation to work on my campaign, but we have no information about who that was or who that corporation was. So it's impossible to respond to a phantom," he added.

Brown says he was also a candidate who called Poilievre out, which he says the party did not like.

“Clearly the party establishment wanted Pierre. I'm shocked that they would take lengths this extraordinary to rob members of the party of a democratic election based on an anonymous complaint that we have no information on,” Brown said. 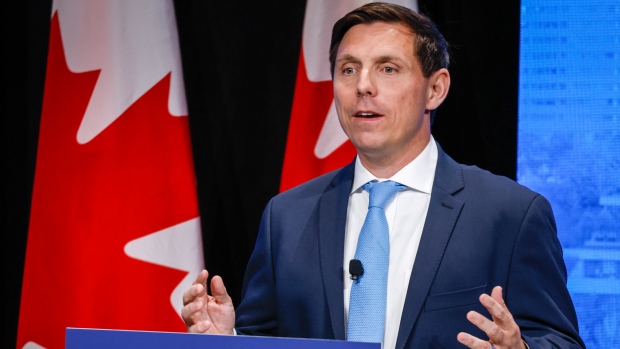 Speaking with CP24 Wednesday, Conservative Party President Robert Batherson said he couldn’t provide the details, but that the complaint originated from within Brown’s campaign.

“The allegations came actually from within Mr. Brown's camp, and I'd love to be able to share to everybody all the information that the party has obtained,” Batherson said. “But the reality is now that this is a matter for Elections Canada. We have serious allegations of wrongdoing under the Canada Elections Act. We are passing our files and our material to the appropriate authorities. They have the capacity and the resources to conduct a fair investigation and give Mr. Brown due process under law.”

He said Brodie, legal counsel and Brown’s camp spent a week back and forth to “try to find a path where the campaign could come into compliance with our leadership election rules, but also the federal elections law. We were very clear in terms of the information that we were looking for.” 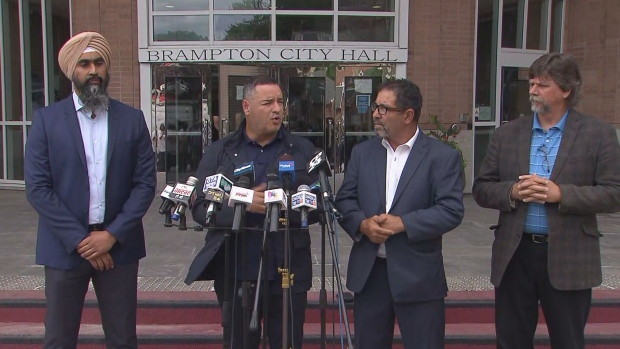 The councillors, who include Pat Fortini, Martin Medeiros, Jeff Bowman, Gurpreet Singh Dhillon and Doug Whillans, penned a letter Wednesday afternoon expressing their frustration with unproven “allegations of financial irregularities” under Brown’s leadership, which they say amount to “a clear and alarming pattern of behaviour.”

The letter was issued less than 24 hours after Brown was disqualified from the Conservative Party leadership race due to “serious allegations of wrongdoing” by the Brown campaign, according to the party’s Leadership Election Organizing Committee (LEOC).

"While the Conservative Party of Canada was investigating serious allegations of election fraud that led to his disqualification, a majority group of Brampton Councillors initiated forensic investigations into allegations of financial irregularities, nepotism and possible backroom contract irregularities under Patrick Brown’s failed leadership. This demonstrates a clear and alarming pattern of behaviour," the councillors wrote in the letter.

The councillors say Brampton's name is being "smeared" due to Brown's actions outside of city hall, and that city business is at a "standstill" due to his priorities being elsewhere.

Brown has told CP24 that he has been present “to attend to any city issue that has come up” during the leadership race and has “juggled both responsibilities.”

He has also said that his absence from a number of recent council meetings is due to a “legal dispute” over the appointment of a new councillor and not because of the leadership race.

“If any decision was made at a council meeting with an improperly selected councillor every decision would be null and invalid,” he said.

Medeiros, however, said that Brampton has essentially not had leadership since Brown “put his name in.”

“This organization, it has a cloud over its head and we need to move on as a municipality. We need to move on and we do now have elections coming up in a couple of months. So that should bring clarity," he told reporters at a press conference Wednesday afternoon.

WHISTLEBLOWER CAME FORWARD WITH ALLEGATIONS ONE YEAR AGO

Medeiros said a whistleblower told councillors over a year ago that city resources were being used for other purposes and that a series of forensic audits are underway to get to the bottom of those allegations.

In addition, on June 15, Rebel News reported allegations that City of Brampton employees were working on Brown’s Conservative Party leadership campaign during working hours, which are funded by taxpayers.

“The City of Brampton’s reputation is really suffering. We've been dragged into a situation not (by) our decision,” Medeiros said.

“The City of Brampton should not be a second or third choice. This is not a place where people come to when everything else fails and the city of Brampton has to be brought into a positive light and has to be front and center in any decision making. And our concern right now is the reputational harm that it’s having, it's almost a cloud over City Hall.”

Brown denied all of the allegations and said his campaign made it clear that if any staff wanted to work for him, they would have to work outside of regular work hours.

“We said very clearly if you do so it should be in the evening or on the weekend, you can’t do so during work hours. And if anyone wanted to come to a campaign event during work hours, they had to take unpaid time off during work,” Brown told CP24 on Wednesday.

After news surfaced about Brown being disqualified from the leadership race, Medeiros said it's an alarming pattern with the mayor.

"So what seems to be is a pattern, it's not exclusive to what I guess the Conservative Party is dealing with. We've been dealing with this for two years, and only many of you have caught on now. So what is frustrating for us is that we know what's going on in Brampton," he said.

Brampton City Council was supposed to meet today to discuss the allegations, among other items, but councillors said the meeting was cancelled late last night. Councillors say this was the fourth straight meeting cancelled so far this year. The previous meetings were cancelled due to there not being enough councillors on hand to meet quorum.

It is unclear if Brown’s name will appear on the Conservative Party leadership ballot when members receive it in the mail in the coming weeks.

The winner is expected to be announced at a convention in Ottawa on Sept. 10.

Brown says he’s disappointed that he will not be able to continue in the race.

“I'm disappointed because I did want to build a moderate inclusive Conservative Party, I was determined to build the Conservative party where it doesn't matter who you love, where you're born, the colour of your skin, what God you worship,” he said.

This is the second time Brown left a leadership race for the Conservatives, after he resigned in 2018 due to allegations of sexual misconduct that he denied.

Last week, the Conservative Party said about 675,000 members had signed up to vote for a new leader, what they described as an unprecedented number for any federal political party.

Patrick Brown announces his candidacy for the federal Conservative leadership race at a rally in Brampton, Ont., March 13, 2022. THE CANADIAN PRESS/Chris Young