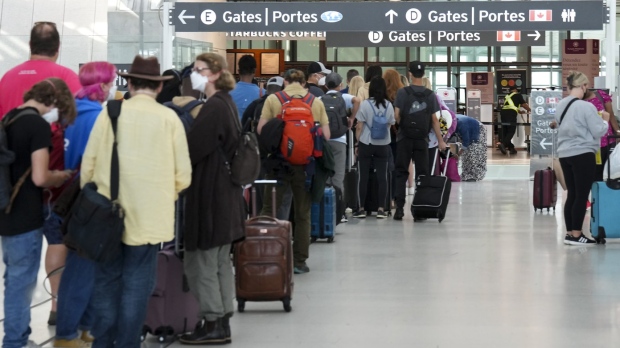 People line up before entering the security at Pearson International Airport in Toronto on Friday, August 5, 2022. THE CANADIAN PRESS/Nathan Denette

Canada's busiest airport says it will offer passengers a way to bypass long security lineups as it looks ahead to a winter travel surge and tries to avoid a repeat of the travel chaos seen earlier this year.

Toronto Pearson International Airport on Thursday announced the launch of YYZ Express, which will allow customers on select flights to reserve their security screening spot in advance.

Having a timeslot booked in advance should remove some of the stress that comes with airport travel, said Deborah Flint, chief executive officer of the Greater Toronto Airports Authority, which operates Pearson.

“Passengers feel anxiety when they are travelling, and one of the first steps that causes that anxiety is how long the security line is going to be," said Flint.

She said that passengers can reserve a spot for individuals or groups of up to 10 passengers on most domestic and international flights at both of the airport's terminals, where they will be transferred to the express security line.

However, passengers must arrive within 15 minutes of the reservation time.

The program comes after a summer of delays and flight cancellations, where Pearson had the world's worst record on delayed flights, according to tracking service FlightAware.

In July, Pearson was the only major airport across the globe to have more than half of its flight departures delayed, as airports and airlines across Canada struggled with struggled to cope with a massive travel resurgence this summer, due to staffing issues that fueled flight cancellations, baggage delays and endless queues.

Since then, the airport has seen its record improve. The Canadian Air Transport Security Authority reported that 89 per cent of passengers cleared security in less than 15 minutes during the week of October 10 to 17.

As winter travel begins to ramp up, Flint said the airport is bracing for a busy winter travel season as it will be the first time since before the pandemic, that many families will be getting together over the holidays.

The airport is maintaining a focus on staff retention and recruitment as it has had the past number of months to adjust to increased travel demand, removing some of the unique challenges faced this summer.

"The reality is that we are still recovering as a global industry," said Flint. "Holiday travel does always have its fair share of challenges."

One of the largest risks currently facing the airport is the border crossing for U.S.-bound passengers, as Nexus lines remain closed and officer staffing levels remain low, said Flint.