Pedestrian struck and killed by dump truck in Brampton 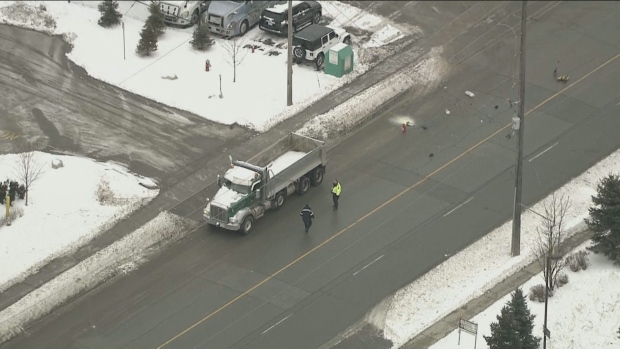 Police are investigating a fatal fail-to-remain crash in Brampton.

A pedestrian struck by a dump truck in Brampton this morning has now died, Peel Regional Police confirm.

The collision happened near Rutherford Road South and Orenda Road at around 7:30 a.m.

The victim, who is believed to be an adult male, was taken to a local hospital in life-threatening condition but was subsequently pronounced dead.

Reports from the scene indicate that the victim may have been on a scooter at the time of the collision.

Rutherford Road is closed between Orenda Road and Clark Boulevard for the police investigation.

Police initially reported the incident as a "fail-to-remain" crash but later confirmed that the driver involved did stay on scene.

The police service's major collision bureau is currently canvassing the area to find anyone with information about the incident.