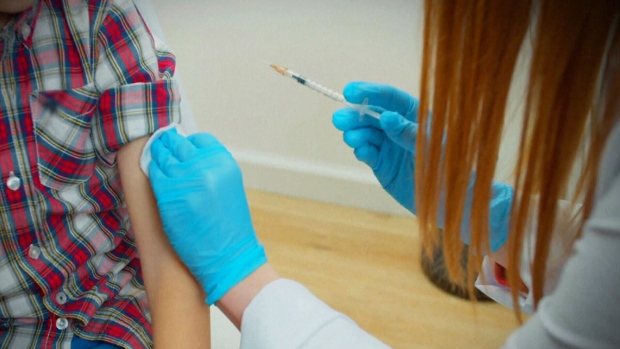 VANCOUVER - A pediatrician who has researched COVID-19 vaccine hesitancy among parents in Canada, the United States and Israel is urging people concerned about getting their children vaccinated to talk to a health-care provider as the Omicron variant pushes cases to all-time highs.

Dr. Ran Goldman, a professor in the department of pediatrics at the University of British Columbia, said the current national vaccination rate among children aged five to 11 is too low, so parents with questions about the safety of the vaccine should get them answered through a personal connection with a pediatrician, family doctor, nurse or pharmacist.

“If those health-care providers listen first and understand what is the basis for the hesitancy, and exactly what questions parents have, they can then address this with their knowledge and expertise. This is the key and the magic, the green card, to getting parents to understand and accept vaccines,” said Goldman, who practises in Vancouver.

Goldman said past campaigns involving pediatric vaccines have shown that conversations with health-care providers are meaningful and have helped to change hesitant parents' minds.

Data from Health Canada show 39 per cent of kids between the ages of five and 11 have received a first dose of the Pfizer-BioNTech vaccine, which the agency approved for that age group last November.

“It's not enough,” Goldman said. “I know we are failing our children in terms of the rate of vaccination. It's not only for the children that receive them, it's protecting all in the environment around them, including their parents, their grandparents, sick or healthy, who need to go to work.”

British Columbia matches the national vaccination rate of 39 per cent, as does New Brunswick, while the lowest rates are in Alberta and Yukon, at 37 per cent, according to government data in those jurisdictions.

In Ontario, nearly 45 per cent of children up to age 11 have received their first dose while the highest vaccination rate, at 67 per cent, is in Newfoundland and Labrador.

Adrian Dix, the health minister in B.C., encouraged more parents to register their kids for a vaccine.

“It will make children safe and, of course, your family safer as well,” he said.

Goldman said parents should know that the consequences from infection are much higher than any possible side-effects.

He was lead author of a study published in the International Journal of Environmental Research and Public Health last October on the willingness of parents to get their children vaccinated against COVID-19.

The research involved a pair of surveys of a total of 2,800 parents in 12 emergency departments in the United States, Israel and Canada. Most of the parents, 54 per cent, were from Canada and surveyed in Vancouver, Saskatoon, Edmonton and Calgary.

The first survey, done during the peak of the pandemic between March and May 2020, showed nearly 65 per cent of parents said they would get their kids under age 12 vaccinated.

Those results were compared with a second survey between December 2020 and March 2021, after a vaccine for adults was approved.

However, less than 60 per cent of parents said they would be willing to have their children vaccinated.

“We were surprised,” Goldman said, adding some parents believed that getting vaccinated themselves was fine, but too risky for their kids.

“We need to work with parents to understand the importance and the safety of vaccines for children specifically,” he said.

Michelle McGrath of Langley, B.C., said she registered her five-year-old son Isaiah for a vaccine as soon as it was approved for use in children.

“It's the most researched part of medicine and has the most stringent standards for safety,” she said of vaccines.

McGrath said she's also worried about the effect COVID-19 could have on her vulnerable 11-month-old twin boys, who were born three months premature and must be taken to regular medical appointments, where they could be exposed to the virus.

Goldman said about 90 per cent of kids will not get infected after they receive the vaccine, which uses one-third the dose formulated for older children and adults.

“Getting the illness and maybe having long COVID is much more risky than any kind of hypothetical, potential side-effects.”

Parents who believe the vaccine was developed too quickly should know that the technology for mRNA vaccines has existed for nearly 20 years, he said.

This report by The Canadian Press was first published Jan. 7, 2022.