Police are searching for suspects after a man was found with fatal gunshot wounds in a trucking yard in Brampton early this morning.

Officers were called to a trucking yard in the area of Queen Street East and Rutherford Road North shortly before 7 a.m. for a report of a shooting in the area.

Police say a member of the public who came into the yard to pick up their vehicle discovered a man suffering from gunshot wounds and contacted police.

“In that enclosed trucking yard we did locate a male who was suffering from gunshot wounds. Paramedics did arrive quickly on scene,” Const. Danny Marttini told reporters on Friday morning.

Despite life-saving efforts, the victim, who is believed to be in his early 30s, was pronounced dead at the scene.

His name has not been released.

Marttini said police believe the shooting happened in the area where the man was found but investigators cannot yet rule out the possibility that he was shot somewhere else. 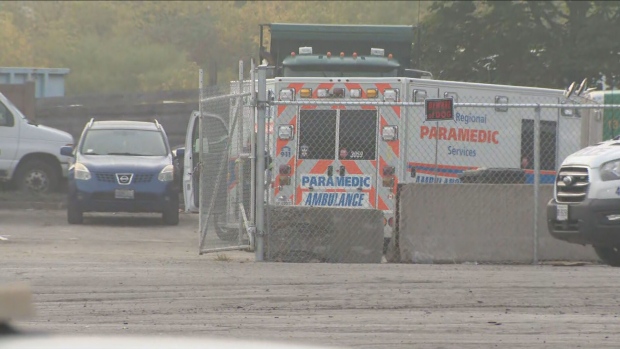 “To our knowledge, we don't have an actual sound of shots fired. That is not to say that there isn't another witness out there that may have heard something and that will be part of our investigation,” Marttini said.

“We haven't found any additional evidence regarding any ammunition...Our forensic unit is actually currently on site and they are combing the space. So there could still be evidence that might be located.”

No arrests have been made.

“In regards to any potential suspect information at this point, we don’t have that. And that's because we are needing to review any video footage, we are having to go and look for witnesses,” Marttini said.

She added that police will be canvassing a nearby hotel and other businesses in an effort to find more witnesses and secure video surveillance footage.

“Depending on the different camera angles, some of them may have picked up either people or vehicles coming in and out of the area,” Marttini said.

There is a large police presence in the area and members of both the tactical and K9 units are currently on scene.

A nearby day care was placed in lockdown as a precautionary measure earlier this morning but that has since been lifted.