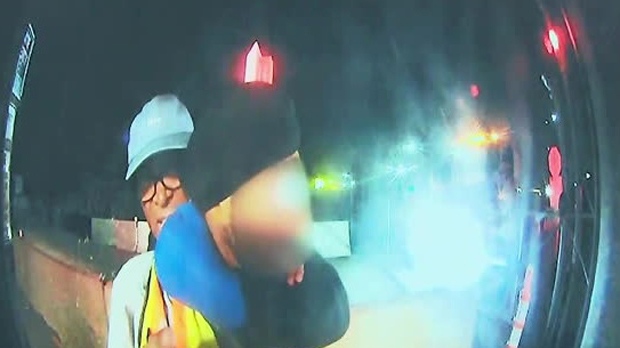 A suspect in the failed July 28, 2019 hold up of a Halton Hills cargo yard is seen restraining a guard in a surveillance camera image. (PRP)

Six suspects, including a 75-year-old man, are facing a slew of charges in a series of failed armed robberies across Peel and Halton regions, beginning with a daring truck heist where they allegedly took $7 million worth of phones which were later remotely disabled, rendering them worthless.

Peel Regional Police Chief Nishan Duraiappah said the six men, aged early 40s and up, face 63 charges combined, and a group of them were allegedly on their way to a heist in Mississauga when they were intercepted by police.

Acting Det. Steve Sherwin said that on March 13, 2019, a black sedan drove into the path of a delivery truck in the area of Steeles Avenue East and Goreway Drive.

Two men forced their way into the cab of the truck and held the driver at gunpoint, while others transferred the truck’s entire load of phones and tablets —8,500 in all — to a waiting getaway truck.

But the manufacturer of the devices quickly disabled them remotely once they were reported stolen.

In the wee hours of July 28, two trucks without trailers approached the entrance of a cargo yard at Steeles Avenue and Winston Churchill Boulevard in the town of Halton Hills.

At the time, investigators said the drivers of both vehicles got out and began to speak to a security guard posted at the gate.

Sherwin said a third suspect then came from behind, armed with a silver handgun, and allegedly put the guard in a headlock, demanding that he open the gate.

Before he could open the gate, the armed suspect noticed he was standing in full view of a security camera and the group fled the scene empty handed.

Almost a month later, on Aug. 25, Sherwin alleges some of the same suspects entered a truck yard in Mississauga and allegedly took three trucks.

Sherwin suggested police were monitoring that encounter, and later on that night, officers intercepted four of the suspects.

“Four males were arrested as they drove to commit another warehouse robbery in Mississauga,” he said, adding officers allegedly seized a loaded Smith and Wesson semi-automatic handgun and bear spray.

Two other male suspects associated to the group were arrested the following month.

One of the accused was identified as 75-year-old Cecil Young.

“I’d be lying if I said that I wasn’t surprised that a 75-year-old was charged. But in criminal investigations there is no age restriction,” Sherwin said.

He said all six men had previous criminal records and had ties to other locations throughout Canada.

Investigators would not comment on how the group hoped to turn the stolen goods into cash but said they were not associated to any larger known criminal enterprise.

Sherwin said a portion of the disabled phones and tablets have been recovered.

A Smith and Wesson semi-automatic handgun seized in Peel Region is shown. (PRP)