'People are being shown no mercy,' advocates warn in Ontario's online-only tenancy hearings 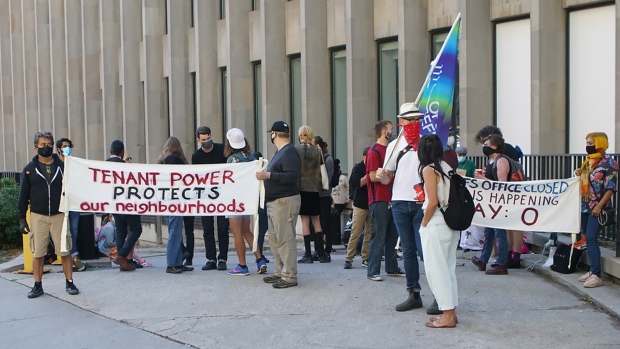 Protesters demonstrate against evictions outside Superior Court of Ontario in Toronto on Tuesday, Aug. 18, 2020. THE CANADIAN PRESS/Jake Kivanc

Tenant after tenant addressed the virtual meeting, describing how COVID-19 has wreaked havoc on their lives and finances over the last year.

A Toronto mother said she struggled to keep up with bills after losing work in the restaurant industry. A Hamilton man behind on rent payments said he was staying in touch with his landlord about his financial situation after being laid off.

“It's COVID, people struggle,” he appealed to Landlord and Tenant Board member John Mazzilli during the Dec. 18 block of hearings -- all of which involved non-payment of rent.

Similar scenes playing out over the last several weeks have raised concern among Ontario advocates who say the pickup of evictions in the pandemic's second wave coincides with a shift to online-only hearings that stack the deck against tenants.

“These people are being shown no mercy,” Kenn Hale with the Advocacy Centre for Tenants Ontario said in a recent interview. “They're expected to pay and pay now or get out.”

Hale, director of advocacy and legal services at ACTO, said it's “absurd” to evict people during a health crisis that has left many unable to pay rent due to lost income.

“It's bad enough in normal times for people to lose their homes and to be treated unfairly an administrative proceeding. But it can be life or death in the kind of situation we're in now,” Hale said in a recent interview.

Evictions were suspended until late summer and the Landlord and Tenant Board is now working through a backlog of cases that observers say predated the pandemic, and has grown this year as more people lose income.

Tribunals Ontario doesn't keep track of evictions, but according to ACTO, the board heard more than 7,000 cases in November. Ninety-six per cent of those were filed by a landlord against a tenant, the ACTO said. As of Dec. 14, 4,597 hearings were scheduled for the month.

Hale said the shift to an online-only hearing model has made it harder for tenants to present their circumstances or access legal advice, including through ACTO's duty counsel program.

Lawyers must now introduce themselves to tenants in the virtual session, in front of all other participants, and both need to exit the meeting to speak privately.

Hale said such introductions don't always run smoothly, with lawyers are entering “chaotic” hearing situations where they struggle to make themselves heard.

There's also concern about changes under Bill 184, which became law in the summer. It allows landlords to offer repayment agreements without appearing before the Landlord and Tenant Board, so some tenants are signing on to potentially unreasonable repayment terms without fully understanding their rights, Hale said.

A group of Ontario legal clinics, including ACTO, wrote to Tribunals Ontario in October with proposed guidelines for adjudicators considering evictions cases during the pandemic -- including the public health risk and pressures on people's finances.

Hale said the group had not received a response as of mid-December.

The Progressive Conservative government has not yet acted on an Opposition motion supporting a freeze on evictions that passed unanimously this month, days before the legislative assembly adjourned until February.

NDP MPP Suze Morrison, who introduced the motion, said the online hearing format isn't accessible for people with visual impairments or those who don't have stable internet access, among other challenges.

A statement from Ford's office this month said the government “is continuing to explore ways to further support Ontarians during this difficult time.”

Tribunals Ontario, meanwhile, said it's pursuing “a digital-first strategy to meet the diverse needs of Ontarians and enhance the quality of our dispute resolution services.”

It said requests for in-person hearings would be considered on a case-by-case basis to ensure people are accommodated under the Human Rights Code. As of mid-December, Tribunals Ontario had not confirmed if any in-person hearings had been approved.

Sam Nithiananthan, an organizer with People's Defence Toronto, said the online hearings have been a “double-edged sword” in the evictions process, as allies can now tune in and support their neighbours.

Nithiananthan said the crisis has exposed longstanding issues renters face in the city, and it's motivated tenants to organize in larger numbers than he'd seen before.

“What has been shifting is tenants are now standing up,” he said.

Tenant organizer Bryan Doherty with Keep Your Rent Toronto said his group and others have called for rent relief that goes beyond a moratorium on evictions, arguing that simply pausing evictions would leave cases to pile up.

“We knew that a moratorium at the beginning of the COVID crisis would actually just produce an eviction blitz midway through the crisis, which is what we're seeing now,” he said by phone in a mid-December interview.

Rents have long been unaffordable in Ontario's largest city and Doherty said “COVID kind of threw gasoline on that fire.”

He said pressure needs to be applied to landlords and governments to address the housing crisis affecting working-class tenants during the pandemic and beyond.

“I don't think it's going to be the same. The question is whether or not it will be worse or slightly better,” he said.