People at Robin Banks video shoot may be able to ID persons of interest in drive-by killing: police 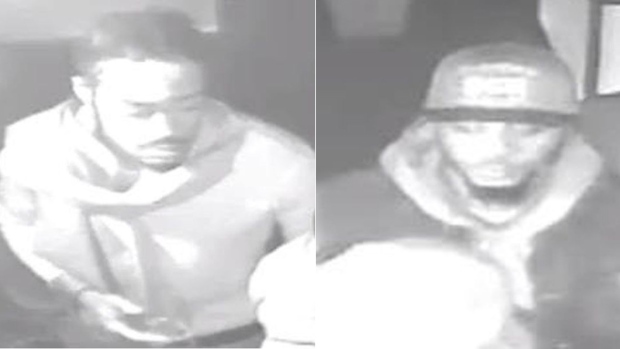 Two persons of interest in the January 23, 2017 killing of Dylan Gill are pictured. (Toronto police)

Toronto police are appealing to the public to help identify two persons of interest who attended a music video shoot in January, a short time before a young man was fatally gunned down while riding in a vehicle on Islington Avenue.

On Jan. 23, shots were fired from one moving vehicle to another on Islington Avenue, near Milady Road in the Humber Summit area at around 12:50 a.m.

The shooting, believed to be targeted, claimed the life of 24-year-old Dylan Gill.

On Wednesday, investigators provided more details about the events leading up to the murder and said that Gill and two friends attended a busy nightclub where rapper Robin Banks was filming a music video just 35 minutes or so before the fatal shooting.

“We now have learned that sometime around 12:15 a.m., the deceased was in the company of two females,” Detective Sergeant Mike Carbone said. “The deceased and his two friends attended the Cameo Lounge Nightclub, located in the Steeles Avenue West and Weston Road area.”

Carbone said that while the three were at the club, Gill had an altercation with two males that prompted him to leave.

“The altercation does not appear to be physical however you can observe some type of interaction between the deceased and these two individuals,” Carbone said.

Gill and his friends left the club and got in a car driven by one of the women. The women were in the front, while Gill sat in the back.

The car went west on Steeles Ave. before turning south on Islington Ave.

As the car approached Milady Road, just a few minutes into the trip, a dark sedan pulled alongside the vehicle and someone opened fire, striking Gill.

No one else was injured in the shooting.

Carbone said Wednesday that police are hoping that someone who was at Cameo Lounge that night can identify the males who had an altercation with Gill before he left.

“We now know that during the evening of Sunday January 22, 2017, a rap artist known as Robin Banks was filming a video for one of his songs,” Carbone said. “We have learned that many of the people that were in attendance were there to watch or perform in the music video. I’m appealing to anyone who was at the club that evening to contact the homicide squad.”

Surveillance images of the two males have now been released and Carbone said he’s hoping that by identifying them, police can move the investigation along.

“My appeal here today is to reach out to the people who were in the nightclub,” Carbone said. “We know there was a filming of this video in that establishment. We know there were more people in there that we’d like to speak to.”

A person of interest in the January 23, 2017 killing of Dylan Gill is pictured. (Toronto police)

A person of interest in the January 23, 2017 killing of Dylan Gill is pictured. (Toronto police)

Dylan Gill, 24, of Toronto, is seen in this undated photograph provided by Toronto police.