Petition to ban dating 'pimp' from entering Canada may have worked 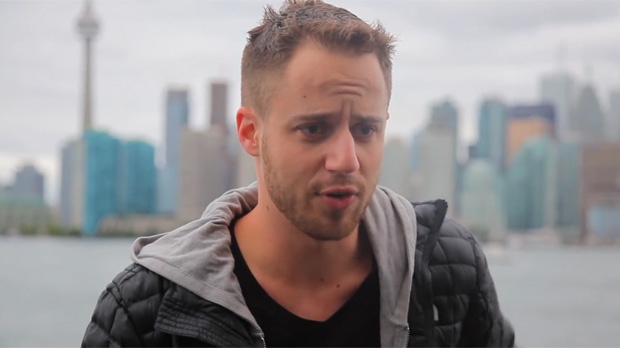 Julien Blanc is pictured while on a 2013 visit to Toronto in this image made from a YouTube video. (RSDJulien /YouTube)

A petition to prevent a man promoting misogynistic approaches to dating from entering Canada may have worked.

Julien Blanc, a 25-year-old man who is often accused of instigating violence against women has already been barred from entering Australia

Blanc offers seminars to men around the world, vowing to make them "pimps" with women and promising to help them get scores of women to sleep with them.

So far the petition to bar his entry, posted at change.org, has received more than 7,000 signatures.

“Julien Blanc and his group, RSD (Real Social Dynamics) are a group of sexist and racist ‘pick up artists,’ who have made a living by teaching men how to violate women through physical and emotional abuse,” the petition charges.

The petition notes that Blanc is set to tour Canada and asks Federal Citizenship and Immigration Minister Chris Alexander to bar his entry. It points to a video posted online that shows Blanc instructing a group of men about how to get Japanese women to have sex.

“In Tokyo, if you’re a white male, you can do what you want,” Blanc says in the video. He then goes on to say he’s able to just grab women in Tokyo and push their heads down.

Techniques covered by the Blanc’s seminars include “How to destroy her ‘Bitch Shield’ and ‘how to never give her the validation she’s after.’”

“It's Offensive, It's Inappropriate, It's Emotionally Scarring, BUT IT'S DAMN EFFECTIVE. Just kidding...” Blanc writes on his site.

The hashtag #KeepJulienBlancOutofCanada spawned a flood of posts on Twitter with men and women speaking out in favour of keeping Blanc out of the country.

On Monday, Alexander said he’s noticed the petition and is looking into it.

“I see your tweets & am aware of #KeepJulienBlancOutofCanada,” Alexander said in one of several tweets he sent Monday night. “His content is completely counter to Canadian values and common decency.”

“My job is to ensure our (immigration) system does not facilitate violence against anyone in Cda & ensure women are protected from all forms of such,” he tweeted.

He went on to say that the government is “looking at all options and will consider using every tool at our disposal to protect the rule of law on Canadian soil.”

Blanc has not so far commented on the campaign to keep him out of the country.

His Twitter page has also been set to ‘private.’

By about 11 p.m. Monday night, the listing of Canadian tour dates on the RSD site had been removed. However, there is no confirmation yet on whether this means Blanc is indeed not coming to Toronto.

#KeepJulienBlancOutofCanada Teaching violence towards women under the guise of being a pick-up artist: not welcome in Canada.

@trevorxramage:If anyone I know thinks what this guy does is okay, I have no problem never speaking to you again.#KeepJulienBlancOutofCanada

Being a man does not mean being physically or emotionally violent towards women so they'll sleep with you. #KeepJulienBlancOutofCanada