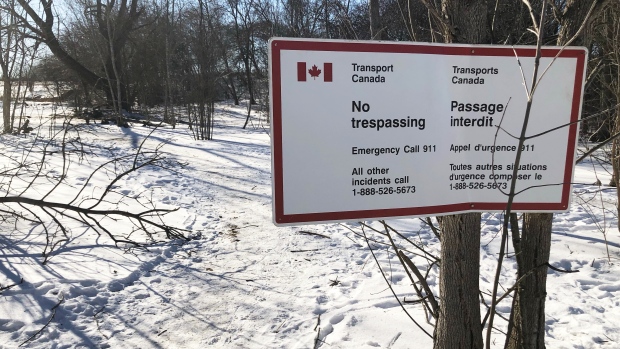 A sign from Transport Canada warning trespassers to stay away is pictured at a skate pond on federally owned lands in Claremont, Pickering. (Submitted)

A community in Pickering is expressing anger after a skating pond they say they've enjoyed for decades was suddenly destroyed without notice this week.

According to local residents, the pond along Sideline 20 in Claremont has been a community fixture for more than 50 years. Some 20 years ago a community member even built a small change hut where the kids could put their skates on.

But on Monday, residents heading to the pond for a skate were greeted by a sign which read "Transport Canada Property - No Trespassing.”

A day later, the change hut was demolished and the kids’ hockey nets removed.

In an email, area resident Steve Macaluso told CP24 that someone also came around to salt the pond so as to destroy the rink.

While the pond is on Crown lands, Macaluso said plenty of other communities make use of waterways on federal lands for skating and called the move “disgusting.”

“Our small community has been using the pond for the past few weeks adhering to social distancing rules,” he wrote. “Our children have used it daily and have enjoyed it more than ever based on the Covid lockdown. It was a great way for them to get outside and exercise.”

On Thursday, Transport Canada acknowledged that “debris” was cleared from the site, but denied salting the pond.

“Transport Canada is committed to protecting the environment, and would never have given direction for the use of salt or any other measures resulting in the contamination of federal lands,” the agency said in an email to CTV News Toronto. “Further, salting would have compromised the integrity of the ice, risking harm to the public.” 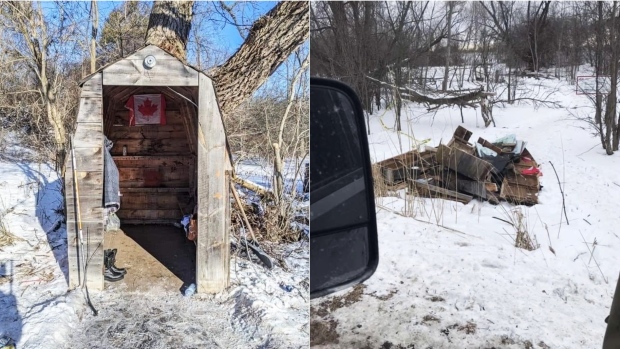 Transport Canada said that while it understands the community has previously made use of the site for skating, the pond is located on an agricultural lot that is currently leased to a private third party.

“Under their lease agreement, the current tenant has the right to allow the space to remain open to only authorized users due to liability concerns,” the statement said. “As well, we understand that the current COVID-19 restrictions in Ontario prohibit outdoor gatherings of the size that was occurring on the property, and as a result the Durham Regional Police have been involved.”

Amid a provincewide lockdown to stop the spread of COVID-19, skating is one of the few outdoor activities currently permitted in many communities.

Transport Canada said that while it “understands” the disappointment of community members who can no longer use the pond, it hopes to work with the community “to discuss potential future legal use.”

Area residents have said they will stay off the ice for now, but don't understand why their little skating pond is being singled out.

"This is really sad, it's not hurting no one, it's out in the middle of nowhere," Claremont resident Cathy Johnston told CTV News Toronto.

Liberal MP Jennifer O’Connell, who represents the area, told CTV News Toronto that she is concerned about the matter and has reached out to Federal Transportation Minister Omar Alghabra to try and resolve the issue.