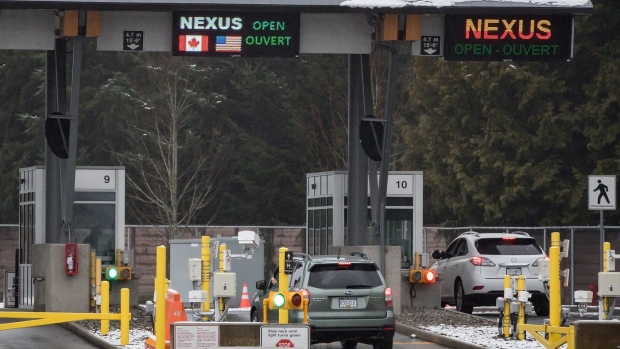 A motorist scans a Nexus card as another speaks with a Canada Border Services Agency officer at a primary inspection booth at the Douglas-Peace Arch border crossing in Surrey, B.C., on Wednesday February 5, 2020. The Canada Border Services Agency says Canada and the U.S. are exploring "shorter-term measures" to shrink a backlog of applications for the trusted-traveller program. THE CANADIAN PRESS/Darryl Dyck

WASHINGTON - Canada and the United States are road-testing a workaround for their irreconcilable differences over Nexus - evidence, officials say, of a shared bilateral commitment to the treasured but imperilled fast-traveller program.

The pilot project underway at the Thousand Islands border crossing between Ontario and New York state marks the first signs of life for a Nexus enrolment centre north of the border since the onset of the COVID-19 pandemic.

But it also suggests that the days of customs agents from both countries conducting joint interviews inside a shared space on Canadian soil are likely over - at least for the foreseeable future.

“Canada and the U.S. continue discussions about the reopening of Canadian enrolment centres and are pursuing solutions to address the current backlog,” Canada Border Services Agency spokesperson Rebecca Purdy said in a statement.

Senior management officials from both CBSA and U.S. Customs and Border Protection met earlier this month in person as part of that ongoing effort, Purdy said.

“These discussions include options for shorter-term measures that continue to increase the number of people being issued new or renewed Nexus cards each month.”

The pilot project has been underway since late September at the Thousand Islands bridge crossing between Alexandria Bay, N.Y., and the Ontario town of Landsdowne, about 50 kilometres east of Kingston, Ont.

Nexus applicants are interviewed in person by a Canada Border Services Agency officer before crossing the border to sit down with an agent from U.S. Customs and Border Protection and to be photographed and fingerprinted.

“The CBSA and U.S. CBP are actively exploring the expansion of this pilot to additional locations along the border where demand and capacity are greatest.”

It's a far cry from how Nexus interviews have traditionally been conducted in both countries, with applicants sitting down for an in-person interview that's jointly conducted by officers from the two agencies in the same room.

That process has been going on as normal in the U.S. since April, when the 13 Nexus centres south of the border re-opened for joint interviews after a two-year pandemic-driven hiatus.

Customs and Border Protection, however, won't send agents to staff centres in Canada without being guaranteed the same legal protections they enjoy on U.S. soil - a condition the federal government in Canada considers a non-starter.

The impasse turned into a full-blown diplomatic row in October when Kirsten Hillman, Canada's U.S. envoy, said the program was being “held hostage” to a unilateral attempt to renegotiate the bilateral preclearance agreement under which Nexus was established.

Business leaders and elected officials in both countries have been pressing the two sides to find a solution, describing Nexus as a critical component of the cross-border trade and commercial ties between Canada and the U.S.

“Trusted-traveller programs, including Nexus, are critical tools in facilitating cross-border travel and commerce. ... However, the delays in processing new Nexus applications have severely diminished the program's effectiveness,” they wrote.

The letter cited Customs and Border Protection data that showed the current average wait time is 16.5 months for a Nexus application that requires any level of review.

It goes on to acknowledge “the implications, sensitivities and complex nature” of the issue, which include “the sovereignty of both countries.”

Purdy said 49,482 new, renewed or replacement Nexus cards were issued between Oct. 6 and Nov. 5 - progress, but a far cry from the backlog of more than 330,000 applications cited in the Higgins letter.

The pilot project is reminiscent of a proposal floated earlier this month by Scotty Greenwood, chief executive of the Canadian American Business Council, who has been among those pushing hard for a resolution.

She said that idea came about while brainstorming with Matt Morrison, the head of a cross-border economic development coalition of western U.S. states and Canadian provinces known as the Pacific Northwest Economic Region.

Greenwood's council has launched a public awareness campaign called Save Nexus that encourages visitors to the website savenexus.ca to pressure members of Parliament to reopen the enrolment centres.

The site has generated more than 1,500 emails so far, said Greenwood, who urged both agencies to be more transparent about their efforts to date.

She also acknowledged that separate in-person interviews likely won't be as efficient as the existing system - and that there may not be a solution available that allows U.S. and Canadian agents to work alongside each other in Canada.

“It's not as good as solving the underlying issues, but it might be the only thing we can do.”