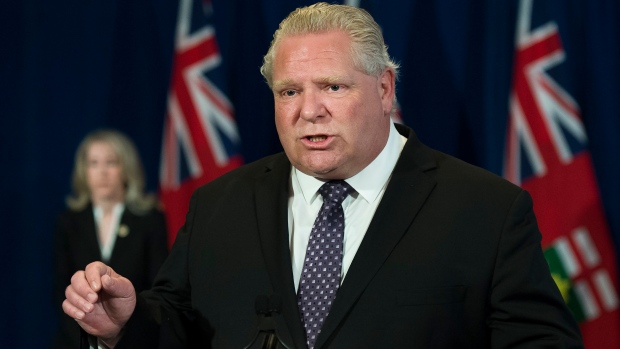 Ontario Premier Doug Ford speaks during his daily updates regarding COVID-19 at Queen's Park in Toronto on Wednesday, May 27, 2020. THE CANADIAN PRESS/Nathan Denette

Ford said “early next week” the province will announce a plan to move to Stage 2, which calls for select office towers reopening for work, as well as allowing gatherings of more than five people.

Ford added that he will “also lay out a phased plan for reopening childcare safely and gradually, so we can support parents as they return to work” sometime next week.

He stressed that announcing the plans does not mean that either will get underway immediately, as he is still closely watching the daily COVID-19 case growth in Ontario, which averaged 360 cases per day over the last week.

Ontario entered the first stage of reopening last month, with individual sports, select retailers and other businesses allowed to resume.

The province’s COVID-19 case growth then started to rebound, prompting officials to hold off on even discussing Stage 2.

Ford and his ministers would not say if hair and nail salons would re-open as part of Stage 2, and he rejected entirely the notion that the re-opening process is moving too slowly.

Ontario is the only full province in Canada still banning hair salons and barber shops from operating.

But The City of Toronto issued an advisory Friday telling all restaurants and “personal care settings” such as barber shops, hair salons and nail salons, to “to prepare for safe reopening.”

“City staff will be communicating with impacted businesses over the next week either individually or through local BIAs, including TABIA and the Ontario Restaurant Hotel and Motel Association to ensure that the resumption of service can happen as quickly as possible once provincial orders are lifted.”

It is still unclear when exactly Ontario restaurants and hair care facilities will be able to resume operation.