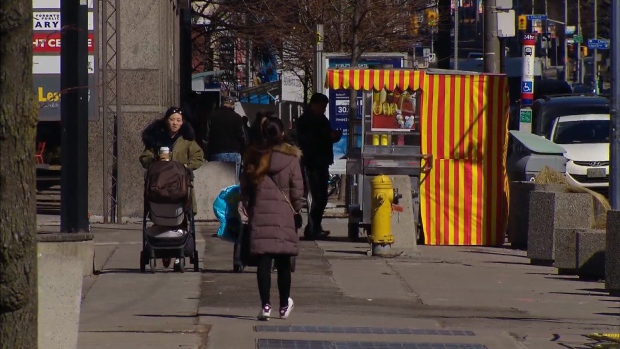 A controversial plan to remove two lanes of traffic along Yonge Street in North York as part of a wider transformation of the roadway is up for debate yet again, more than two years after city council put it on hold to allow for more study.

The plan was first brought forward in February 2017 as city staff examined a number of options for rebuilding a stretch of Yonge Street between Sheppard and Finch Avenues.

At the time staff and the city councillor for the area, John Filion, both favoured a more radical redesign of the corridor that would have seen the number of lanes of traffic reduced from six to four in order to accommodate a bike lane, wider sidewalks and a landscaped median, among other public realm improvements.

Mayor John Tory, however, opposed the plan and asked staff to prepare an alternative that would have placed a bike lane along a parallel corridor on Beecroft Road, allowing the number of lanes of traffic on Yonge Street to stay the same.

That scale-down proposal was ultimately approved at the committee level but in March 2018 city council voted to defer further consideration of it so that the potential impact to a number of TTC routes could be further examined.

Two-and-a-half years and one municipal election later the issue is back in the headlines with staff now recommending that the city proceed with its initial vision for Yonge Street, including the removal of two lanes of traffic.

In a report that will go before the city’s infrastructure and environment committee next week, staff say that the impact on commute times as a result of removing two lanes of traffic will be minimal with drivers travelling along Yonge Street between Wilson/York Mills and Steeles being slowed by “less than a minute” on average during peak times.

“Overall, the increases in travel time, and reductions in average travel speed, are relatively nominal and represent an acceptable trade-off against the implementation of safety improvements, including wider sidewalks, and cycle tracks on Yonge Street,” the report notes.

The plan favoured by staff will cost taxpayers an estimated $60.4 million, which is nearly double the price tag of reconstructing Yonge Street without the public realm improvements ($29 to $35 million).

Staff, however, say that approach is not recommended “as it would fail to leverage on the opportunity of creating a safer and more complete street through state-of-good-repair investments.”

They also point out that the average traffic along Yonge Street on North York is up to 18 km/h faster compared to other “major urban main street corridors,” such as Bloor Street and Danforth Avenue, something that will be at least partially addressed by removing two lanes.

“By reducing a travel lane in each direction, and implementing wider sidewalks for pedestrians, as well as protected bicycle lanes (cycle tracks), Yonge Street can be designed to be a safer and more comfortable environment,” the report notes. “Further, with the inclusion of streetscape improvements such as enhanced landscaping, operating speeds can be reduced to improve the safety of people who walk and cycle, and encourage a modal shift towards active transportation.”

Back in 2018, Tory told CP24 that the intersection of Yonge Street and Sheppard Avenue is “one of the most chaotic for traffic in all of Toronto” and that he could not support any proposal to removal lanes of traffic.

Speaking with CP24 on Tuesday morning, longtime city councillor John Filion said that the staff-endorsed plan would essentially transform Yonge Street in North York from a “highway to a main street.”

That, he said, would be good news for the 100,000 people that live within walking distance of the corridor.

“It is just going to be totally different. Standing here you can hear how loud the cars are and when the light turns green you can see how fast the cars are going compared to other main streets. It is very dangerous,” he said. “It will be much safer, it will be much friendlier and it will just have a completely different feel to it.”

Filion said that there are currently parts of Yonge Street where the width of the sidewalk is “totally inadequate” for the pedestrian volumes in the area.

He said that by widening the sidewalk and making other public realm improvements, the city turn the corridor into a “real gathering place” for people in the surrounding neighbourhood.

As for the debate that derailed the plan last time around, Filion said that he is hopeful that it will go “pretty smoothly this time around.”

“It would be a big failing to just put new concrete down where the old concrete was so we are really looking to transform this section of Yonge Street,” he said.

If ultimately approved by city council, construction along Yonge Street could begin as early as 2025.