PM under pressure to explain how feds will ramp up COVID-19 testing, contact tracing 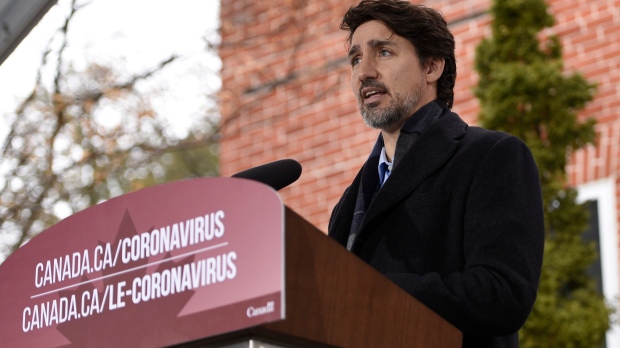 Prime Minister Justin Trudeau speaks during his daily press conference on the COVID-19 pandemic outside of his residence at Rideau Cottage in Ottawa, on Sunday, April 5, 2020. THE CANADIAN PRESS/Justin Tang

OTTAWA - Prime Minister Justin Trudeau will be under pressure today to detail how the federal government will help provinces massively scale up testing for COVID-19 as the country slowly begins to come back to life.

Trudeau reiterated Thursday evening his offer of federal help on testing and contact tracing during his weekly conference call with premiers -- repeating an offer he first made a week ago and which the Prime Minister's Office says was well received.

Yet despite that offer, the provinces and territories combined are testing fewer than 30,000 Canadians every day -- less than half the available testing capacity that chief public health officer Theresa Tam has said should be the target.

The lack of testing is particularly problematic in the two largest provinces, which account for some 80 per cent of the COVID-19 cases across the country.

Ontario has fallen far short of its goal of 16,000 tests per day, with the province completing 10,506 tests on Tuesday.

In Quebec, home to more than half Canada's COVID-19 deaths, 9,582 tests were completed on Monday, according to the latest figures.