Three pedestrians have been injured after they were struck following a two-vehicle collision in Willowdale, Toronto police say.

The pedestrians were hit in the area of Yonge Street and Park Home Avenue, near Sheppard Avenue West, at around 8 a.m.

Reports from the scene suggest that two cars collided at the intersection, causing both vehicles to veer off of the roadway.

Const. Alex Li told CP24 on Friday morning that it appears one of the vehicles involved in the collision hit a gas line and crashed into a nearby building.

The pedestrians, police say, were struck during the collision.

"The initial reports were that there were two pedestrians that were struck," Li said. "When our officers arrived on scene, they identified a third victim." 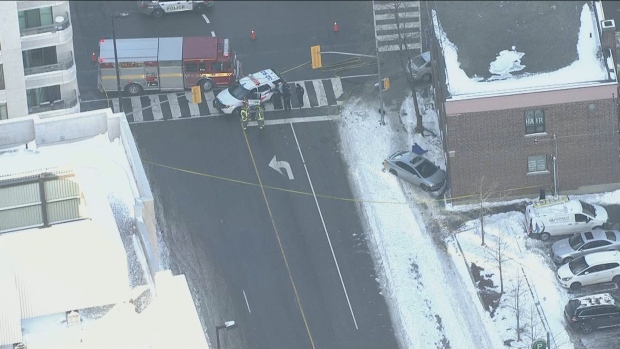 Paramedics confirmed that two of the pedestrians, a male and a female, have been transported to trauma centres with serious but not life-threatening injuries.

A third patient was assessed at the scene, paramedics say, but their injuries are not believed to be serious.

The driver of the vehicle remained at the scene, Li said.

The circumstances leading up to the crash are still under investigation. The collision has resulted in a gas leak in the area and Enbridge is currently on scene working to fix the issue.