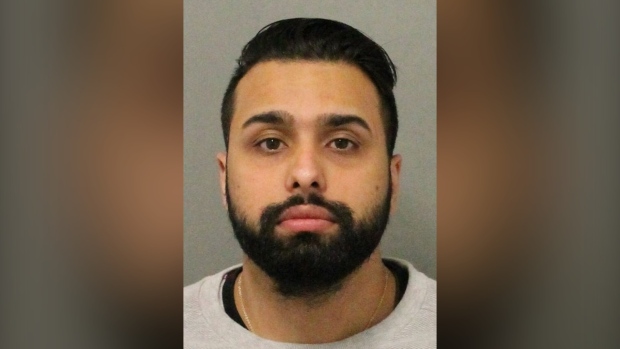 Kalyan Trivedi is seen in this undated photo. Toronto police have arrested and charged Trivedi in connection with the fatal hit-and-run collision on the Gardiner Expressway on Oct. 3, 2021. (Toronto Police Service)

A 31-year-old driver who allegedly fled the scene of a collision on a Toronto highway earlier this month that left a woman dead has been arrested, police say.

The crash occurred on the eastbound lanes of the Gardiner Expressway near Islington Avenue in the early morning of Oct. 3.

Police allege that Kalyan Trivedi was driving a 2015 Audi R8 at a high rate of speed on the highway when he rear-ended a Grey Nissan.

The collision sent the Nissan into a median guard rail, which caused it to flip over onto its roof, police said.

One of the occupants of the Nissan, 58-year-old Norma Buendia, suffered life-threatening injuries and was transported to the hospital, where she later died.

Her 61-year-old husband Roberto Carlos, who was the driver of the Nissan, was also taken to the hospital with non-life-threatening injuries.

Following the collision, Trivedi allegedly pulled over on the right shoulder of the expressway and fled the scene on foot.

On Thursday, police announced that they had arrested Trivedi.

He is facing four charges, including dangerous conveyance causing bodily harm and leaving the scene of an accident causing death.

Buendia’s son, Franco Gonzales, previously told CTV News Toronto that his mom and stepfather were driving from Mississauga to pick up their other son in Toronto when the collision happened.

Gonzales said his mother was an amazing woman loved by everybody.

Police continue to appeal for anyone with information about the whereabouts of Trivedi in the hours leading up to the collision and to contact police at 416-808-1900 or Crime Stoppers anonymously at 416-222-TIPS (8477).

- with files from Chris Herhalt and Sean Davidson

Police are investigating a fatal collision on a Toronto highway.