A 27-year-old man has been charged after police said they found a hidden camera inside the women’s bathroom at a Tim Hortons in Hamilton.

According to investigators, a cellphone was found in a women’s restaurant stall late Thursday morning.

Hamilton resident Emily Hasler spoke to CTV News Toronto on Friday and said her sister found the phone in a pile of garbage while with her young child. She said the phone was attached to a battery pack. 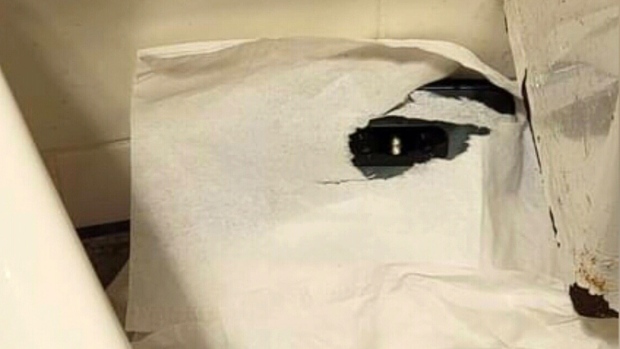 “It’s just like a violation,” Hasler said. “You just feel disgusting after that.”

Hamilton police confirmed at the time that the cellphone was still recording when officers seized it.

On Monday afternoon, police announced they had charged Daniel St. Amour in connection with the investigation. .He is also now facing additional charges for an unrelated incident and is wanted by Halton Police Service for failing to appear in court, authorities said.

Police said Amour is not an employee of Tim Hortons.

Anyone with information about the investigation is being urged to contact police.

Daniel St. Amour, 27, is seen in this undated photograph provided by Hamilton Police.