Police can march in Pride Parade unarmed, in civilian clothes 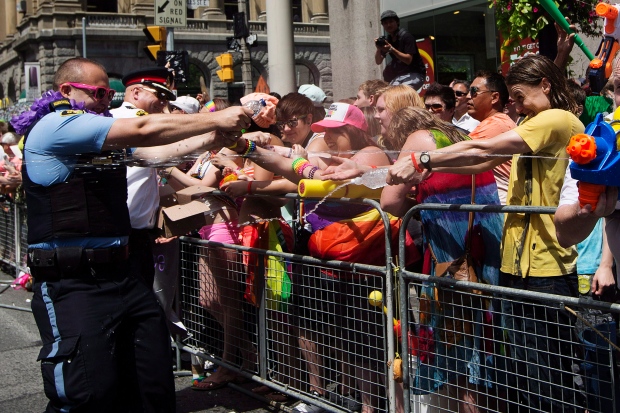 A police officer is sprayed by onlookers during the 33rd annual Pride parade in Toronto on Sunday, June 30, 2013. (The Canadian Press/Michelle Siu)

Pride Toronto is clarifying its position on police participation in the 2017 Pride Parade, as it defends itself against a proposal by one city councilor to pull its funding.

In a statement issued Sunday night, Pride Toronto executive director Olivia Nuamah says LGBTQ officers and “their allies” will be able to march in the parade, so long as they do so without their weapons, uniforms and vehicles.

Officers can “march in the Parade with community groups, with the City of Toronto, or even create their own group,” Pride says.

In January 2017, those who attended Pride Toronto’s Annual General Meeting voted in favour of banning police and their floats and other memorabilia from the parade.

The vote occurred after Black Lives Matter — Toronto halted the 2016 Pride Parade with a sit-in, issuing a list of demands including the exclusion of police from participating.

Then-Pride executive director Mathieu Chantelois signed the list of demands so the parade could resume, but later recanted. He resigned from the position in August.

Black Lives Matter representatives said they wanted police to be excluded from the parade because their presence made LGBT black youth and other members of racial and sexual minority groups feel unsafe.

At the time, Toronto police Chief Mark Saunders said the service would respect the demands made and not participate in the parade.

Toronto Police Association President Mike McCormack said the exclusion of police from the parade and the chief’s decision to go along with it was “political pandering.”

In response, Toronto City Councillor John Campbell suggested he would move a motion to pull $260,000 in city funding from Pride Toronto until they could reaffirm “their value of inclusivity” and allow police to participate.

Nuamah said Sunday she will provide a deputation at the city’s Economic Development Committee on Monday to argue why the city shouldn’t pull its funding.