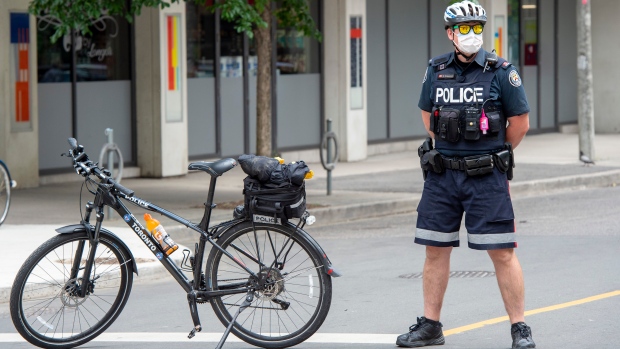 A Toronto police officer watches during an anti-racism march in Toronto on Saturday, June 6, 2020. THE CANADIAN PRESS/Frank Gunn

Toronto police have charged a 21-year-old man who was allegedly holding a large knife while observing the anti-racism protest Saturday afternoon.

In a news release on Saturday evening, police said a protester reported the suspect to a police officer after seeing him with a knife on the sidewalk near Yonge and Grosvenor streets just after 2:30 p.m.

When officers made contact with the man, police said he fled on foot.

The man was arrested a short distance away following a chase, police said.

Police confirmed a video of the man's arrest was posted on social media.

In the video, police are seen yelling at a man to get on the ground while their weapons were pointed at him.

The man then puts his hands up and gets down on one knee as the police continued to command him to get on the ground.

A few moments later, one of the officers fired his Taser at the man, who subsequently falls to the ground.

The man was allegedly in possession of three knives, police said.

He has been identified as Toronto resident Boyu Shi.

Police have charged him with assault with a weapon, possess weapon/dangerous to public peace, and carry a concealed weapon.

Shi will appear in court on Sunday.