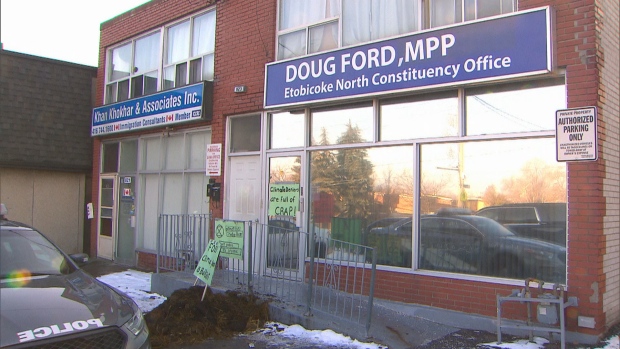 Two men have been charged after allegedly dumping a pile of manure in front of Premier Doug Ford's constituency office in Etobicoke last December.

A video posted on social media appeared to shows the men in the back of a pickup truck shovelling manure onto the ground in front of Ford's office at 823 Albion Road on December 22.

The Hamilton chapter of Extinction Rebellion took credit for the stunt, and said it was in response to Ontario's auditor general "effectively declaring that the Ford Conservatives' climate action program is a load of crap."

"To make their point, XR members shovelled a truckload of organic cow manure onto the doorstep of Ford's constituency office this morning," the group said in a release.

At the time of the incident, the premier's office said in a statement that the group won't be getting any response from Ford.

Toronto police were called to the office to investigate.

Topp told CTV News Toronto that they wanted to do something that would bring attention to the climate crisis.

"We are doing this in self-defence," he said. "It's a flamboyant action, with the dumping of manure, but it gets the point across. We have to motivate enough people to demand that we act rather than just all quietly, politely say we should really do something."

Both men are scheduled to appear in court next week.

- with files from Katherin DeClerq