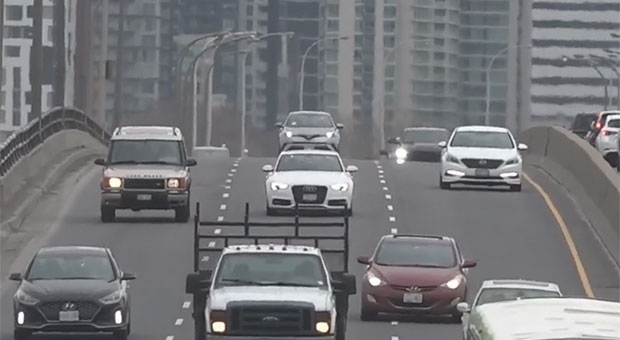 Motorists are seen driving down the Gardiner Expressway in this file photo.

A 23-year-old man is facing several charges, including refusing to provide a breath sample, after police say he was caught driving more than 200 km/h on the Gardiner Expressway early Tuesday morning.

According to police, an officer conducting speed enforcement duties on the Gardiner shortly before 4 a.m. caught the driver of a 2017 Honda Civic travelling 204 km/h in a 90 km/h zone in the westbound lanes of the highway near Ellis Avenue.

After pulling the vehicle over, police say the officer suspected that the driver was under the influence of alcohol.

A breath test was requested but police say the driver refused.

The man was arrested and charged with refusing to provide a breath sample, dangerous operation of a motor-vehicle, stunt driving, and speeding.

Crews said the man was travelling at “an extremely high rate of speed” and is lucky he did not seriously injure himself or another motorist.

“A person travelling at this speed… this is a very deliberate act. This wasn’t a situation where you are doing 10 kilometres over the speed limit because you are preoccupied with having to take your kids to daycare or something like that,” he added.“This person knew what they were doing and it is very, very concerning.”