A ground-breaking ceremony for a new building planned for the city’s waterfront came to an abrupt end on Thursday morning after a group of protesters showed up and demanded that Mayor John Tory take immediate action to protect tenants from eviction during the COVID-19 pandemic.

The province banned residential evictions at the outset of the pandemic in March but that prohibition is expected to come to an end once the provincial state of emergency expires later this month, causing some renters to worry that their landlords will quickly move to evict them over unpaid rent.

On Thursday Tory was delivering remarks at an event to mark the beginning of construction on a new sustainable building near Queen’s Quay and Parliament Street when dozens of protesters carrying signs and a megaphone showed up and demanded that he use his emergency powers to implement a city-wide ban on residential evictions to replace the provincial order.

The protesters also demanded that Tory call on the provincial government to reverse the recently passed Bill 184, which they say could expedite the eviction process.

Initially, Tory told the protesters that he would be happy to speak with them once he concluded his remarks but after they continued to interrupt the event, things got tense.

First one of the protesters made reference to Tory’s “million dollar condo,” prompting Tory to say “the longer you talk about this sort of thing the more you are going to lose credibility.”

Then after they continued to interrupt him, he said that he would not allow them to “decide on the timing of when we speak to things” when he had already agreed to answer their questions and attempted to resume his remarks.

When he was interrupted yet again, he accused the protesters of being the same group that attempted to force their way inside his Bloor Street condominium during another protest earlier this month and walked off the stage.

Tory has previously said that he felt as though that demonstration crossed a line and left some of his neighbours “afraid” and “unnerved.” 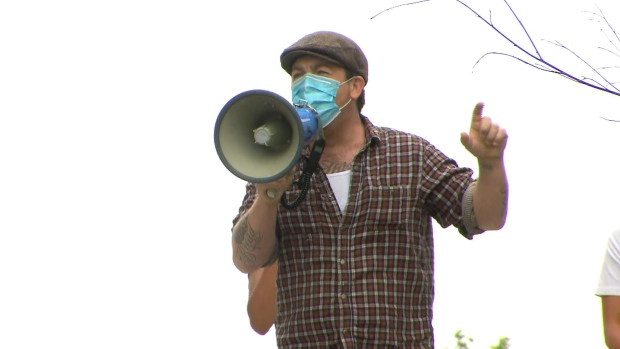 After Tory walked off the stage he was followed by the protesters as he made his sway to a nearby building.

He then went inside while the protesters waited for him out front.

He emerged about 20 minutes later after a group of police officers showed up and escorted him into a waiting SUV while the protesters shouted out “schedule the meeting right now” and “you said you were willing to talk.”

“Outside John Tory’s condo he said that instead of coming to his condo people should sit down and talk to him. Where has he been since then because all he has done is ignore us and the positions we have put forward,” one of the demonstrators, Ashley Dougherty, told CP24. “Today he could declare support for tenants that are unable to pay rent and who refuse to leave their homes because of COVID. He could do that today.”

Tory has previously said that he supports some sort of measure that “takes account of the fact that you can’t just go from one state of affairs to another overnight” when it comes to residential evictions.

He has, however, said that the issue is a provincial matter and that there is ultimately little he can do to address it since he doesn’t have any control over the provincial Residential Tenancies Act.

“There are multiple actions he can take but if he is just going to sit idle then this is what we are going to have to do,” another one of the demonstrators, Hanna Mugal, told CP24 prior to Tory leaving the area. “We can’t just keep having the same conversation. In two weeks the Landlord and Tenant Board will open up and the moratorium on evictions will be lifted. We are looking at thousands of evictions in this city. He needs to step up.”

Tory says city has no legal authority to ban evictions

In a statement issued following Thursday morning’s protest, Tory said that he is “willing to work with anyone who wants to constructively work with him to help the residents of Toronto” and repeatedly offered to speak with the protesters after the announcement.

Tory, however, said that the city’s lawyers have advised him that he has “no legal authority to impose a ban on evictions.”

As for the protesters demand that he call for the repeal of Bill 184, Tory said that the city solicitor will be reporting directly to council on the possibility of legally challenging certain provisions “which undermine the rights of tenants to a fair hearing.”

“I continue to be focused on addressing the ongoing challenges with affordable housing and homelessness in our growing city and would urge those who share those concerns to join me in continuing to advocate to the other levels of government for assistance,” he said.

A group of protesters are shown flanking Mayor John Tory during a groundbreaking ceremony on Thursday morning.