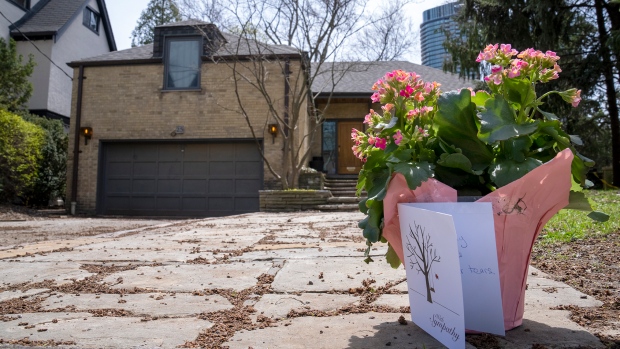 Flowers and a card sit on the driveway of the Rosedale house where the wrapped body of a young girl was found in a construction-site dumpster bin, in Toronto, Thursday May 5, 2022. THE CANADIAN PRESS/Frank Gunn

Toronto police say they are actively looking at several missing persons cases as they try to piece together the identity of a little girl whose body was found in a dumpster in Rosedale last week and they are hoping to have more definitive information within the coming days.

Speaking with reporters outside of Toronto Police Headquarters Wednesday afternoon, Inspector Hank Idsinga said police are looking at several known cases as they try to determine the identity of the girl, who is estimated to have been somewhere between four and seven years old when she died.

“We’ve got a couple of missing persons occurrences we’re still looking at to make that definitive match. It's gonna take quite a bit of work as you can,” he said.

The girl’s body was found in a dumpster outside of a vacant home on Dale Avenue, north of Castle Frank Station, on May 2.

Police said last week that the her body was left there somewhere between noon on April 28 and 4:45 p.m. on May 2, but that she may have been dead since last summer.

Idsinga said Wednesday that forensic teams have since been through the home "with a fine toothcomb” and that investigators are trying to narrow down the possible cases that could be a match.

“There are several in the GTA area that we’re definitely looking at and there's different types of circumstances,” Idsinga said. “An awful lot of these occurrences can be familial abductions, for instance. They could be anything from outstanding immigration warrants on families and they disappear from the shelter systems. We've seen it before and thankfully, we do have those occurrences on file. People have made enough of an impact where their absence is noted and somebody's reported them missing.”

However there are challenges in properly identifying a child in such a case, he said.

“To make that actual definitive link to the people involved in that occurrence and the young girl found in the dumpster takes quite a bit of work, as you can imagine,” Idsinga said. “It’s not as if she's going to have fingerprints on file.”

The Office of Forensic Pathology is still working on the remains to try to get more answers as to when the child died and how, he said, and investigators will likely be looking to evidence such as dental records to help identify her.

Idsinga said he’s hoping that “in the next several days” he’ll  have more definitive information to share.

“There's a lot going on in the background that you are not readily able to see, but we've got an awful lot of people working on this and I'm pretty confident that we'll come up with some answers,” he said.

While information is limited, police have described the girl as Black, of African or mixed African descent. She was about three-foot-six, with a thin build and black curly hair that was in four short ponytails, two of which were braided and secured with black and blue elastic bands.

Her remains were wrapped in a crochet blanket inside a plastic bag. That bag was wrapped in a coloured blanket. Police released an image of that blanket last week in the hopes of triggering someone’s memory.

Idsinga said police have since received a lot of tips in the case, he but urged anyone else with further information to come forward as well.