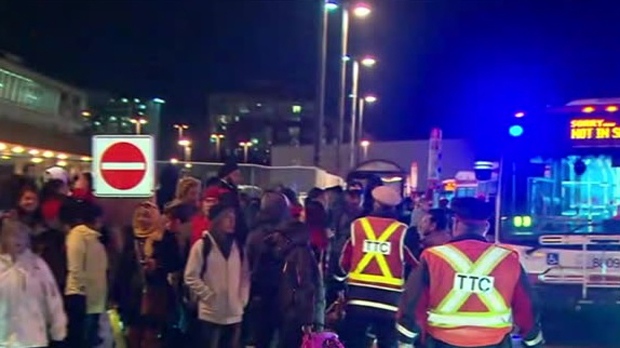 Passengers are seen outside Kennedy subway station after a fatal stabbing closed the station. (CP24)

Police have identified the 28-year-old man stabbed to death at Kennedy Station on Saturday night.

Shortly before 6 p.m., officers were called to the parking lot outside the Scarborough subway station after two or three males were spotted fighting.

Security in the area broke up the altercation but prior to their arrival, a man sustained multiple stab wounds, police said Saturday.

A suspect was later located by officers at 41 Division and a weapon was seized, according to police.

The suspect, identified by investigators as 20-year-old Mohammad Raswoli, of Toronto, has been charged with second-degree murder.

Anyone with information about the case is asked to contact police or Crime Stoppers anonymously.