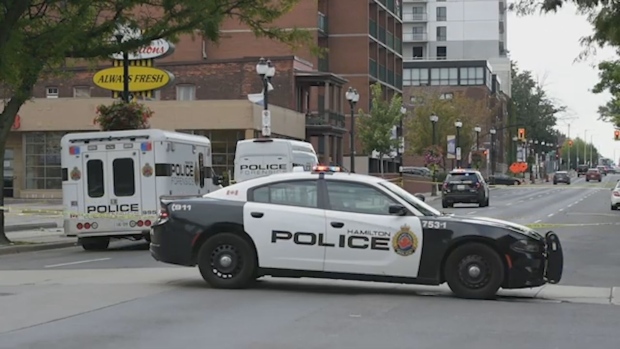 Hamilton police are investigating a shooting outside a Tim Hortons that left one man dead.

Hamilton police have identified the 19-year-old man killed in a shooting at a Tim Hortons parking lot on Tuesday.

Emergency crews were called to the coffee shop on King Street West, near Caroline Street South, shortly before 3 p.m.

Staff Sgt. Jim Callender said two people were in the parking lot when a suspect approached them.

He said a short verbal altercation ensued, and the suspect fired shots at the two people.

When officers arrived, they located a man who was pronounced dead at the scene. He was identified Wednesday as Sabir Hassen Omer from Hamilton.

He is the city's 13th homicide victim.

Callender said the second victim was able to get away from the suspect and did not sustain any injury.

The suspect fled the scene on foot and was last seen southbound on Caroline Street toward Main Street.

Police said they believe the incident was targeted.

"This is something that is unacceptable in the community. One shooting is too many, but this is another thing where it's happening in broad daylight, at a busy commercial industry on a busy street and main artery of our city," Callender said.

The suspect is described as male, between five-foot-six and five-foot-eight, with a medium build. Police said he was wearing dark clothing and dark shoes.

"We know that there was a lot of individuals there. We have spoken to many that were there. There are many people that are outstanding. It's very important to us that if you have information that you need to share with us," Callender said.

"We need people to come forward to speak with us and to help us get to the end of this investigation as soon as possible."

Callender is also urging residents in the area to check their surveillance cameras between the hours of 2:30 p.m. and 3:30 p.m.