The homicide unit is investigating after a 43-year-old man was fatally shot in a parking lot in Scarborough’s L’Amoreaux neighbourhood on Saturday afternoon.

It happened at around 1:40 p.m. on Chester Le Blvd at Morecambe Gate, which is in the Finch and Victoria Park avenues area. 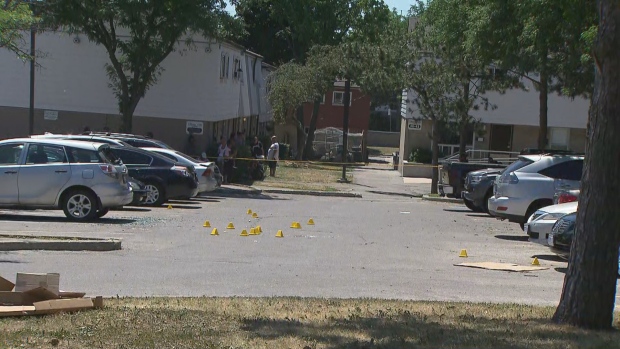 "Police received several 911 calls for a shooting that had taken place. Several callers indicated that there was one male victim," Toronto police Duty Insp. Stacey David told reporters at the scene.

When officers arrived, they located the victim suffering from gunshot wounds.

The man was rushed to a trauma centre with life-threatening injuries. He was later pronounced dead.

Police have identified the victim as Andre Charles, of Toronto.

Davis noted that police are looking for two male suspects, who were fled the area in a blue Hyundai.

No further suspect descriptions have been provided.

"We're appealing for any witnesses that were in the area. Anyone that may have dashcam or anyone that does have private video cameras," Davis said.