Toronto police have identified the 58-year-old mosque caretaker who was killed in a stabbing in Rexdale Saturday night.

Police responded to a stabbing at the International Muslim Organization (IMO) mosque in the area of Rexdale Boulevard and Bergamot Avenue, west of Islington Avenue, around 8:40 p.m. 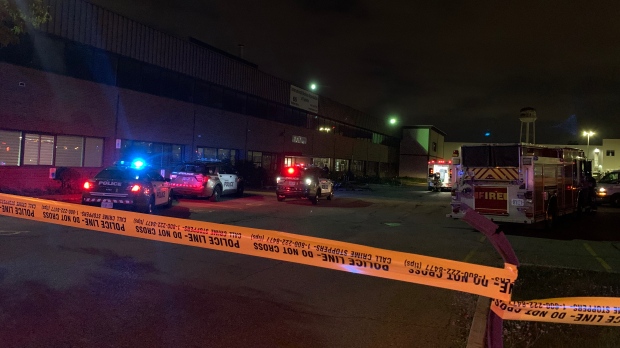 Police said a man who was working as a volunteer caretaker for the mosque was sitting in a chair outside the front doors, controlling the access to the building to comply with public health measures, when the suspect approached and stabbed him once.

When emergency crews arrived, they located the victim suffering from a stab wound to his neck. He was pronounced dead at the scene.

Police have identified the victim as Toronto resident Mohamed-Aslim Zafis.

Investigators are searching for a male suspect with a slim build wearing a black hoodie and dark pants who fled the area on foot.

On Sunday, police released a security video of the suspect.

"It is a very vicious, gruesome attack," Const. Alex Li said. "You have somebody here, that's a caretaker at a mosque, and he was just out there doing his job. And the suspect, unfortunately, chose to end his life."

When asked if police are investigating it as a potential hate crime, Li said homicide investigators are not ruling that possibility, but at this time, the information they have does not suggest that it is a hate crime.

In a statement, IMO said they are “deeply saddened and shocked” to learn about the incident.

“There are no words for what happened to the member of this congregation,” the organization said.

“We further encourage our community not to speculate on what happened as the investigation is ongoing. Instead, we ask that you keep our brother and his family in your prayers.”

In a statement on behalf of the mosque, the National Council of Canadian Muslims said the building is closed and will reopen following the conclusion of the investigation.

The homicide unit is appealing for anyone witnesses and those with cell phone images, dashcam footage, and security video in the area to contact them at 416-808-7400 or Crime Stoppers anonymously.

Police are looking for the suspect in a stabbing outside a Rexdale mosque that killed one man. (Handout)