Toronto police say they are still investigating the details of a dispute that led to the fatal shooting of a 21-year-old man outside a Scarborough LCBO on Sunday evening.

The shooting took place in the parking lot of an LCBO location on Danforth Road, near Victoria Park Avenue, at around 5:30 p.m.

According to investigators, the 21-year-old victim, who has now been identified as Toronto resident Jakub Sudomericky, got into a verbal altercation with a 20-year-old man inside the store.

Police say the victim left the store first and a chase ensued within the parking lot after the suspect exited the LCBO seconds later.

Gunshots were heard and Sudomericky was subsequently found lying on the ground in the parking lot suffering from a single gunshot wound to his upper body.

He was rushed to hospital in critical condition but later died from his injuries. 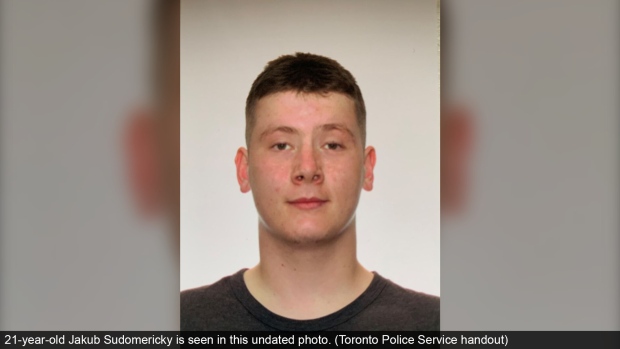 “The suspect fled the scene in a vehicle and a civilian witness passed the licence plate of the vehicle on to police through a 911 call,” Det. Amanda Thornton told reporters on Monday afternoon.

“Responding officers located the vehicle within eight minutes of the shooting and less than two kilometres away from the scene.”

Three occupants of the vehicle were taken into custody and one man, identified by investigators as Michael Roberts, a 20-year-old Toronto resident, has now been charged with first-degree murder.

Police say the two other people who were arrested have now been released and are not expected to face charges in connection with the incident.

Victim, suspect did not know one another

The motive for the shooting is still under investigation but police did confirm that there is no indication the victim and suspect knew one another prior to the incident.

One witness and a police source told CP24 on Monday morning that the victim and suspect appeared to be arguing over social distancing inside the store, a detail homicide detectives would not confirm when speaking to reporters during an update on Monday afternoon.

“The basis of the argument which took place within the LCBO is still under investigation and that's not something I'm going to comment on at this time,” Thornton said.

“We are not going to rule anything out at this point.”

Thornton did say that both the suspect and victim were wearing masks while inside the LCBO.

She said based on the video surveillance footage and witness reports, the argument inside the store did not appear to be an overly heated one.

“Based on the video I've reviewed, I wouldn't say there was any intensity to it at all,” she said.

“We are looking for witnesses who were inside the store to come forward and tell us what they heard and what happened. We have spoken to a fair amount of people.” 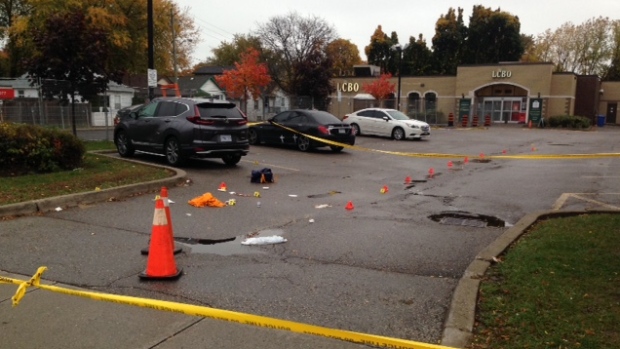 When asked why police decided to charge the suspect with first-degree murder, Thornton said investigators do have some evidence to suggest there was planning and deliberation.

“Whether the plan is very simple, it is executed and that's what happened during this incident,” she added.

A knife was recovered from the scene but police say they are unsure how it is connected to the incident.

Police have not said if the firearm used in the shooting has been recovered.

The accused made a brief appearance in court on Monday morning.