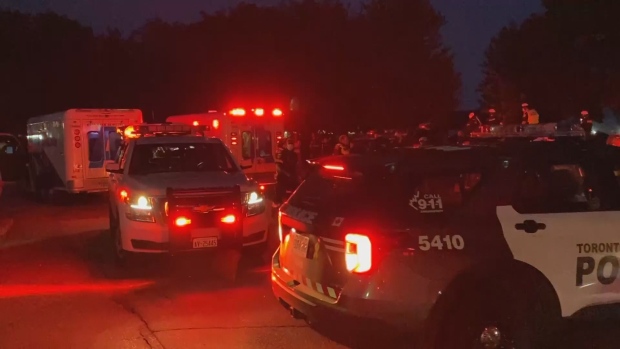 Police are investigating a stabbing at Ashbridges Bay Park.

Investigators say they have arrested and charged a 24-year-old St. Catharines man in connection with a stabbing at Ashbridges Bay Park on Saturday night that left a 16-year-old boy in serious condition.

Police arrived at the park, near Coxwell and Lake Shore Boulevard at 9:16 p.m. to find several people firing roman candles at people in the park.

A fight broke out between the Roman candle shooters and several other people.

Investigators said a male suspect involved in the fight produced a blade and allegedly stabbed a 16-year-old boy several times.

The boy fell unconscious and was rushed to hospital in serious condition.

The alleged assailant fled the scene but was later captured by police.

The weapon used in the assault was also recovered.

The accused was identified Sunday as Livingston Bromwell.

He was charged with one count of attempted murder.

Two other 16-year-old boys were also arrested and charged after allegedly firing Roman candles at people in the park.

Both were charged with one count of assault with a weapon.