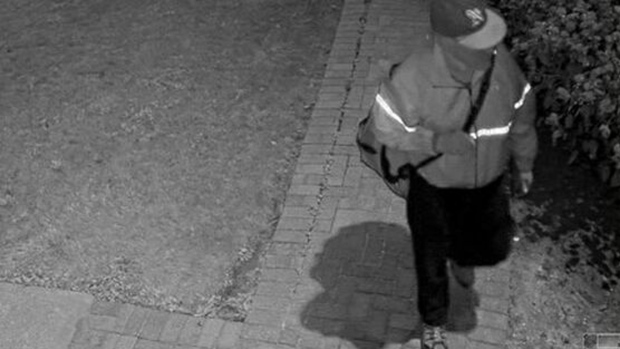 Police released this image of the suspect after a church statue was vandalized in midtown Toronto.

Police have released security images of a suspect who they believe is responsible for damaging a statue at a church in midtown Toronto.

It is alleged that just after 7:30 p.m., the face and hands of the statue of Mother Mary were damaged.

On Saturday, police release the image of the suspect.

He is described as between 50 and 60 years old, five-foot-eight to five-foot-nine, and has an average build.

Police said he was wearing a dark reflective strip top, dark pants, a baseball cap with an “A” logo, and work boots. The suspect was carrying a large duffle bag with wheels on it.

Investigators are appealing for witnesses to come forward and speak to them.

This is the second reported incident in the city where a church statue was vandalized. In August, the Virgin Mary statue at a Parkdale church was found decapitated