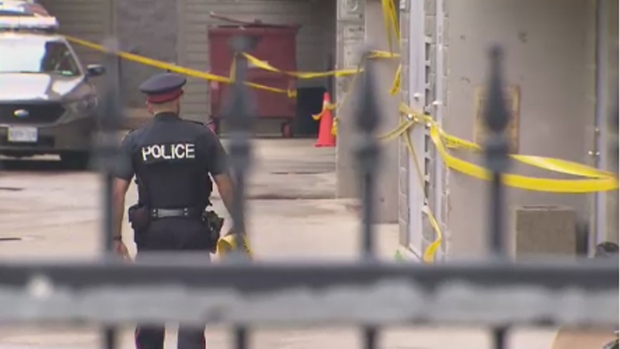 Police erect yellow caution tape at a building on Richmond Street where a young woman was found dead June 12, 2018.

The death of a young woman whose body was found inside an apartment in the West Queen West area on Tuesday is now being investigated as a homicide.

Toronto police said they received a call about a suspicious death at around 5:15 p.m. on June 12.

Officers arrived at the Richmond Street building, between Strachan Avenue and Niagara Street, and found a 28-year-old woman with obvious signs of trauma in a fifth-floor apartment. The woman, who has not yet been identified, was declared dead at the scene.

Her death was initially being investigated as suspicious. However following an autopsy on Wednesday, Toronto police confirmed that homicide investigators have now taken over the case.

In a news release, police said that investigators are not releasing the cause of death at the moment.

No one is in custody in connection with the death so far.

Police are appealing to anyone who has any information about the case to come forward to speak with investigators.