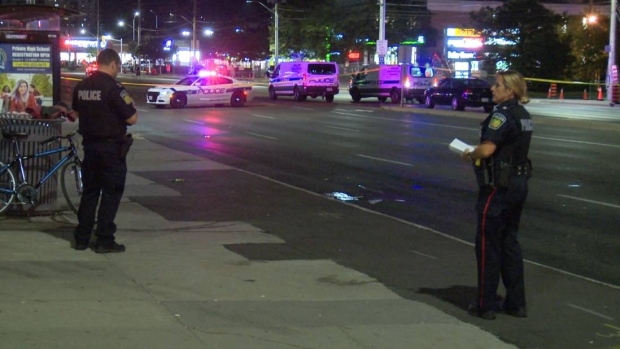 Police are shown investigating at the scene of a deadly fail-to-remain collision in Mississauga.

Police have located the driver of a tractor-trailer that was involved in a fatal hit-and-run in Mississauga overnight.

The tractor trailer was headed northbound on Hurontario Street at around midnight when it hit the cyclist near Dundas Street.

The cyclist, a 55-year-old man, was rushed to hospital but was pronounced dead at around 4 a.m.

In a message posted to Twitter shortly before 1 p.m., police confirmed that the driver and vehicle have been located though it not clear whether they will face charges.

“The investigation is continuing,” they said. “Anyone with information is asked to call the Major Collision Bureau.

Police have not yet released the identity of the cyclist, however a friend who was with him at the time of the collision told CTV News Toronto on Thursday that he was a “good guy” who “helped everyone.

The friend said that when he was struck by the tractor trailer the victim was heading home from a birthday party.

“He has cancer. He didn’t deserve this,” Ashley Wilson said.

Police have previously said that it is possible that the driver of the tractor trailer did not realize that they struck the victim.

“Our Major Collision Bureau is still investigating. They will be canvassing the area for video surveillance and witnesses and they are urging anyone with dash cam footage to contact them,” Const. Sarah Patten told CP24 earlier on Thursday morning.