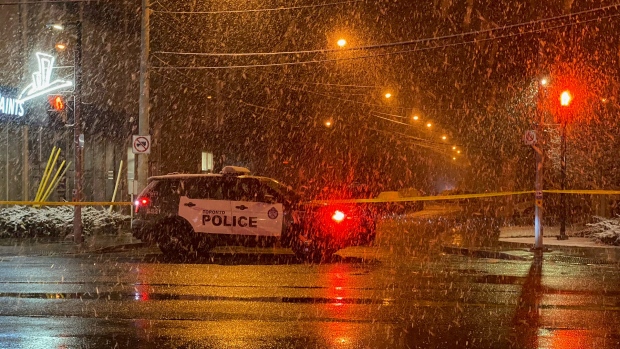 A police vehicle blocks off Sibley Avenue at Danforth Avenue after a van belonging to a missing man presumed to be dead was found there on April 21, 2021. (Mike Nguyen/CP24)

Police say they located a van along an east-end Toronto street on Wednesday morning belonging to 54-year-old man they presume is dead.

Investigators say they believe the van belongs to 54-year-old Paul Daly, who was last seen alive in the O’Connor Drive and Woodbine Avenue area on April 2.

On April 16, police charged a 40-year-old man with indecent interference with a dead body in connection to Daly’s disappearance.

A suspect police identified as Courtney Michael Tenn appeared in court at Old City Hall on April 19 to answer to the charge.

Daly’s body has not yet been located.

Forensics officers were seen documenting and photographing the minivan on Wednesday morning.

Police told CP24 homicide detectives have been made aware of the discovery in case the investigation is handed to them.

A Dodge minivan belonging to Paul Daly, 54, is shown in a surveillance camera image. (Toronto Police)