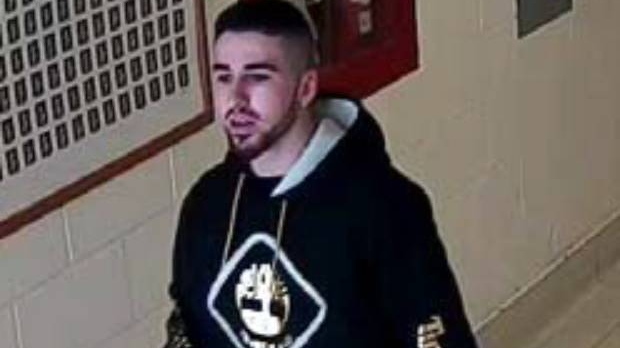 A suspect wanted in connection with an assault at King City Secondary School is shown in this surveillance camera image. (York Regional Police)

Police have released a surveillance camera image of a man who allegedly walked into a classroom at a King City school last month and proceeded to punch a teacher in the face.

Police say that the man went inside King City Secondary School at around 11:30 a.m. on Nov. 10.

They say that once inside the suspect walked around the first floor of the school and then went upstairs to a classroom on the second floor. At that point, police say that he punched a teacher in the face before fleeing the building.

The teacher, a 37-year-old man, sustained minor injuries in the attack. Police say that there were no students in the school at the time of the incident.

“Investigators have exhausted all leads and are releasing an image of the suspect and appealing to the community for any information that may lead to his identity,” police said in a press release issued on Thursday morning.

The suspect is described as white, 20 to 25 years old with brown hair and a beard.