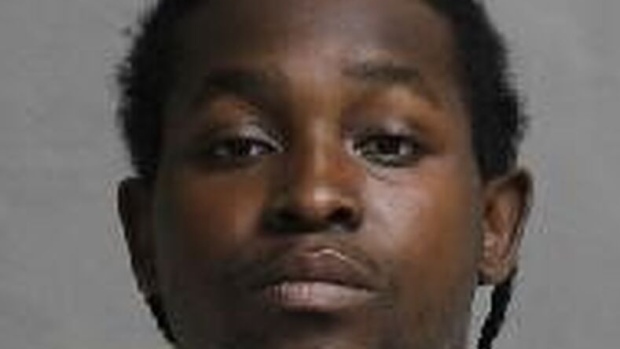 Christopher Otoo, 27, is shown in this handout photo. Otoo is facing charges in connection with a number of recent assaults. (Toronto Police Services)

Police have arrested a 27-year-old man in connection with a series of hate-motivated assaults over the last four months, including one in which a woman and her three-month-old baby were targeted.

Police say that they began an investigation on Sept. 29 after being made aware of a hate-motivated assault in the vicinity of Celeste Drive and Kingston Road in Scarborough’s West Hill neighbourhood.

They say that a woman was walking in the area with her three-month-old baby at around 2:30 p.m. when she was approached by a man yelling racial slurs. That man then allegedly threw a water bottle at the woman, striking her on the shoulder. It is further alleged that he then picked up the bottle and threw it in the woman’s face, spilling water on her baby in the process.

The suspect fled the scene following the incident but on Oct. 17 police made an arrest in the case.

They say that further investigation has since revealed that the suspect taken into custody on Oct. 17 was also wanted in connection with four other assaults dating back to June.

In one of those incidents on June 7, police say that a man was sitting on a bus in the Markham Road and Eglinton Area when he was approached by a suspect. They say that the suspect then yelled racial slurs before spitting on the man and striking him in the head, knocking off his turban.

In another incident on July 22, police say that two people travelling on a TTC bus towards Kennedy Station were also approached by a man who yelled racial slurs. They say that the man punched one victim in the ear and the other in the eye and ear. He also allegedly tried to remove a Patka from one of the victim’s.

The other two incidents involved seemingly unprovoked assaults on transit riders on a subway at York Mills Station and on the subway platform at Dufferin Station.

“All of these incidents have been brought to the attention of our Hate Crime Unit. Any evidence that indicates a hate-motivation to the attacks will be brought forward to the Crown Attorneys in charges of this case for consideration,” police said in a press release.