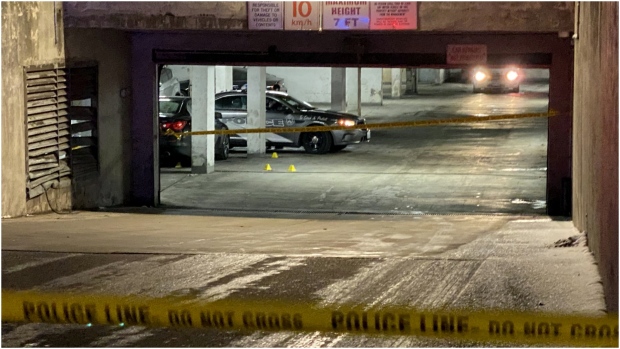 Police have taped off a parking garage in Malvern after a shooting sent a man to hospital where he later died. (CP24/Peter Muscat)

Police have charged three people with first-degree murder in connection with the city’s 77th and final homicide of 2019.

Clinton Phil Williams, 43, was shot dead after walking into an underground parking lot near Neilson Road and Crow Trail shortly after 6 p.m. on Dec, 31.

Investigators previously said that the suspect or suspects fled the scene in a light-coloured car.

On Monday, police said that they executed multiple search warrants with assistance from the Peel Regional Police Service and the Sarnia Police Service.

Three people were taken into custody as a result: Ethan Lee, 20, of Toronto, Kedar Guerra, 38, of Sarnia, and Atneil Nelson, 33, of Toronto.

Police say that all three suspects have been charged with first-degree murder in the death of Williams.

They are all expected to appear in court at Eglinton Avenue East on Tuesday.

Clinton Phil Williams, 43, died in hospital New Year's Eve after he was shot in an underground parking lot in Malvern, according to police. (Toronto Police Service)