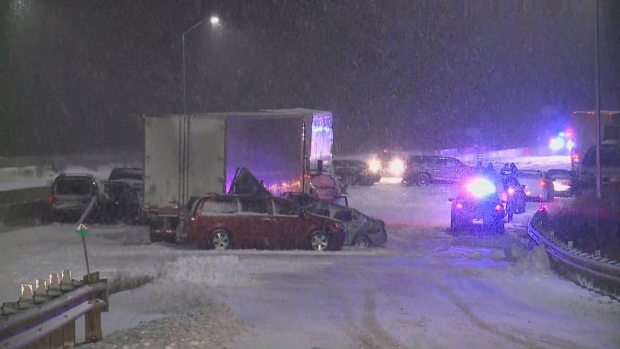 Provincial police are investigating a fatal crash on the westbound lanes of Highway 401 in Kingston on Sunday afternoon.

TORONTO -- Ontario Provincial Police have identified the person killed in a multi-vehicle pileup on Highway 401 as a man from Nova Scotia.

Police say 33-year-old Matthew Robert Jamieson died at the scene of the crash in Kingston, Ont., on Sunday.

The collision, which involved up to 40 vehicles and big-rig trucks, also sent 15 to 20 others to hospital, most of them with non-life-threatening injuries.

It took place as a stretch of Ontario was battered by a mix of freezing rain, ice pellets and snow.

The westbound lanes of the highway were closed in the area until early Monday morning and police say the investigation is ongoing.

Another crash killed a 24-year-old woman in the Niagara region and approximately 400 crashes were reported in the Greater Toronto Area.

More snow was in the forecast Monday for the Greater Toronto and Hamilton areas and as far east as Kingston.

Environment Canada said the light snow and flurries were expected to taper off by noon, but warned many roads were likely to be slippery.