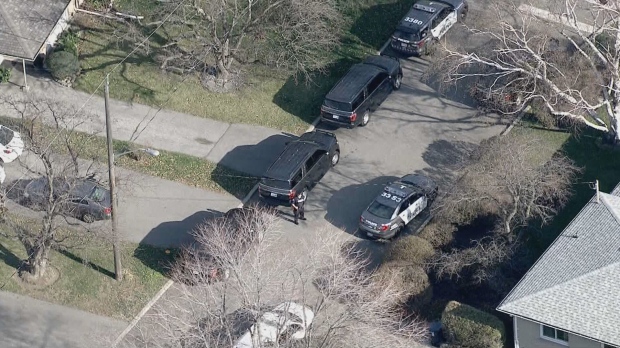 Toronto police are looking for two suspects in a black Range Rover after a pursuit in North York Friday morning where a police officer sustained non-life threatening injuries.

At around 11:45 a.m., Toronto police responded to reports of an altercation on Baltray Crescent, near Victoria Park Avenue and Highway 401.

Police say four individuals were apparently fighting outside of a house and that one of the individuals may have had a gun.

When officers arrived on scene two of the four individuals fled in a black Range Rover.

While fleeing the scene the vehicle hit an officer and rammed a police cruiser, police say.

The male officer was transported to hospital with non-life threatening injuries.

Police then chased after the two suspects, who they say at one point were driving at 120 kms/hr. in a residential area.

Police are still looking for the two suspects. No description of them has been released so far. However, the Range Rover has extensive damage.

Police are still on Baltray Cres. investigating at the scene.