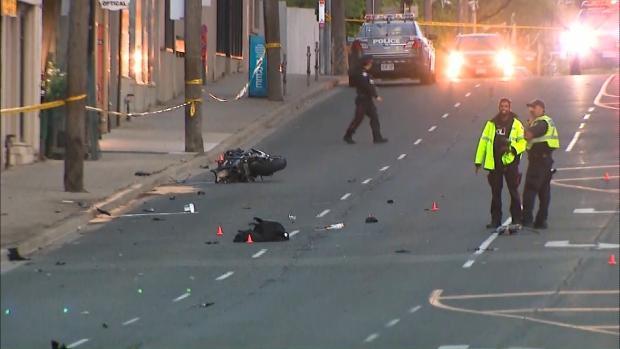 Police are continuing to investigate a deadly crash that claimed the life of a 29-year-old motorcyclist in Midtown on Monday night.

Officers were called to the area of Bathurst Street and Glengrove Avenue West shortly before 6:30 p.m. for reports of a collision.

Police say a 29-year-old man was driving a Yamaha motorcycle southbound on Bathurst Street when he collided with a 19-year-old woman driving a Toyota eastbound on Glengrove Avenue.

The motorcyclist sustained life-threatening injuries and was taken to hospital, where he was later pronounced dead.

Police say members of the traffic services unit are investigating the circumstances surrounding the deadly crash.

Officers are asking local residents and businesses with security camera footage of the incident to contact investigators.

Police are also looking to speak to drivers who were in the area who may have dash camera footage of the fatal crash.