Toronto police executed a series of search warrants at storefront cannabis distributors in the city Thursday.

The raids are part of an investigation dubbed 'Project Claudia,' police said.

Officers were spotted at multiple dispensaries across the city, including two in Kensington Market - Cannawide, located at 34 Kensington Ave., and Toronto Holistic Cannabinoids, located at 79 Baldwin St.

Police said they will be providing more details about Thursday's raids during a news conference at Toronto police headquarters at 10:30 a.m. Friday.

Advocates for the medical marijuana industry have planned a protest at the same location beginning at 10 a.m.

A spokesperson with the City of Toronto confirmed that municipal standards officers were issuing charges to the business owners for zoning bylaw contraventions along with other municipal bylaw charges.

As of May 25, the Municipal Licensing and Standards office said it had issued 78 notices to property owners out of a known 83 medical marijuana dispensaries.

The notices warned property owners that the dispensaries violated city zoning bylaws and advised them that they could face charges if they didn't cease operations.

Mayor John Tory's office would not comment on the raids Thursday but speaking to CP24 Wednesday night, Tory was vocal in his opposition of the pot shops.

"I don't have any issue with the decriminalization of marijuana, none whatsoever, I support it. It is the right thing to do. But the law is not going to be changed for a year or so... and in the meantime I'm just saying we can't afford to have the Wild West," Tory said, calling the dispensaries "bogus."

"They are conducting activities that are not within the law and I just think we can't have them popping up on every street corner and nearby schools and messing up the livelihood trying to be earned by small business."

In an interview with CP24 Thursday afternoon, Chris Cardozo, the owner of Toronto Holistic Cannabinoids, insisted that his business is above board.

"It is absurd especially since I am a prescription-only dispensary. I don't understand how they are only targeting the ones that are doing it by prescription only," he said.

"Me and a number of dispensary owners who have been running properly from the beginning when we opened our doors have been targeted and in this event I am planning on bringing a lawsuit against the city because this is unfair and not right." 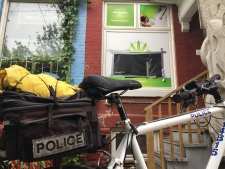