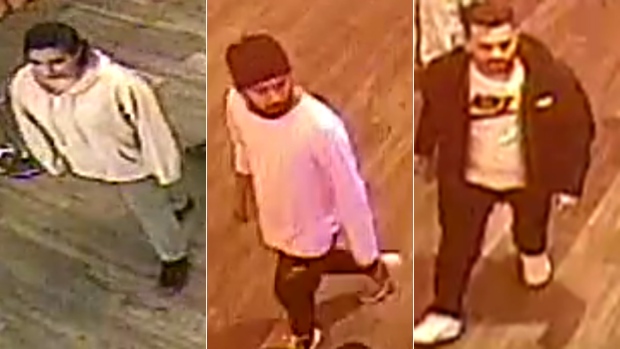 Police are looking for these three people who they say were also involved in an attack outside a bowling alley in Brampton.

Peel police are looking for help to identify three people who they say were also involved in an attack at a bowling alley in Brampton last month that left two men injured.

On Wednesday, police released photos of the three individuals in connection with the incident that happened outside Bowlero, located in the area of Bramtree Court and Chryslery Drive, at 12:45 a.m. on April 16.

Police said two men in their 20s were attacked by a group of men and were assaulted with sticks and bats.

A video of the attack, which police described as 'vicious,' was posted on social media weeks later.

Police said the suspects had already left the scene when they arrived.

The victims were transported to hospitals, one with life-altering injuries while the other had non-life-threatening injuries.

Two days after the incident, police issued warrants for the arrest of 24-year-old Gurkirat Singh and 25-year-old Manjot Singh, both from Brampton.

Police said the 24-year-old suspect went to 21 Division on April 25 with a legal representative and was charged with attempted murder, assault with a weapon and assault causing bodily harm.

On Wednesday, police said the 25-year-old suspect remains at large and urged him to turn surrender.